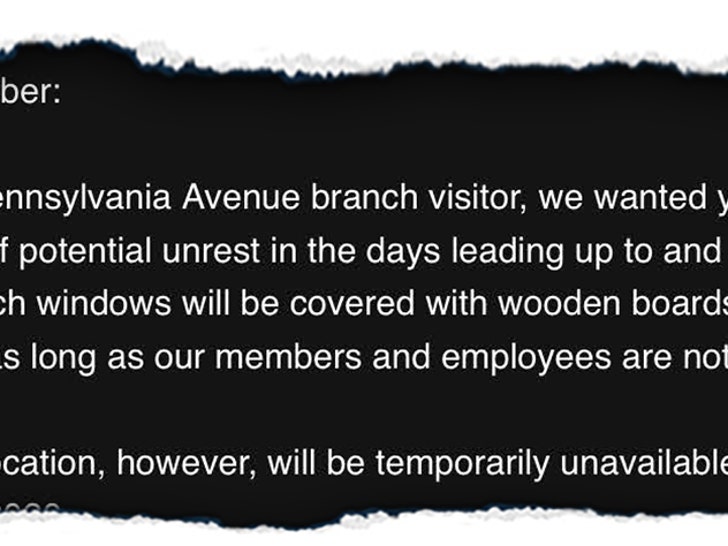 As election night draws near, banks and apartment complexes from coast-to-coast are gearing up for unrest — cautioning folks to be ready for the worst.

TMZ has learned one bank in Washington D.C. sent a letter to its customers saying it would remain open, but with boarded-up windows “due to concerns of potential unrest” before and after the election.

It also shut down its ATM for the time being, and says it will close if it feels employees are in danger.

As we’ve already told you … businesses and shops in D.C. have been boarding up in anticipation of election violence, and police across the country are bracing for protests that could get out of hand.

Likewise, an apartment complex in L.A. — with 5 separate buildings — sent a notice to its hundreds of residents, saying there would be an increase in security “in an abundance of caution” over potential election chaos.

The complex says it will also be cracking down to make sure only residents and their guests are able to get onto the grounds. It’s warning everyone to be on alert for strangers.

There are plans to board up businesses across the country, including on Bev Hills’ famed Rodeo Drive.

More signs of what you’ve been hearing — this election is unlike any other in our lifetime. Buckle up!