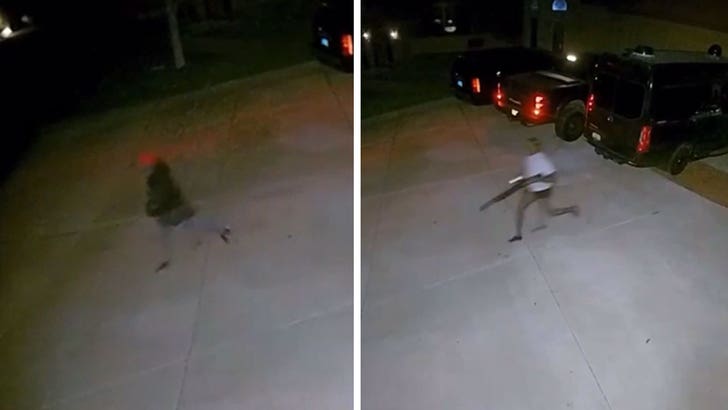 Jon Jones‘ fists are as good a weapon as any, but when it comes to someone allegedly trying to steal his crap at home … nothing gets the job done like a 12-gauge!

The UFC superstar posted security footage that he says was captured at his home — presumably, in Albuquerque, where he lives — that shows what appears to be a man sneaking around his driveway at night, peering into cars … and trying to make a clean getaway.

Check it out … as the alleged burglar hears the garage open, he makes a run for it. Little does he know that JJ is a professional athlete. Not only that, he was locked and loaded!

You can see Jon give chase with what he says is a shotgun he owns, and he was catching up to the dude pretty quickly on foot. Both men run off camera, and you don’t get to see what happened after … but Jon broke it down in detail in a follow-up IG caption.

He says he ended up tapping on the driver-side window of this guy’s vehicle with the muzzle of his firearm — to us, that means he caught the dude and held him up at gunpoint and presumably waited for cops to arrive. Jon adds, “Next time you try to rob someone, make sure you’re fast enough to out run them.”

Jon went on to say he’s smart enough not to gun someone down who’s retreating, while also warning young people that material possessions aren’t always worth your own life.