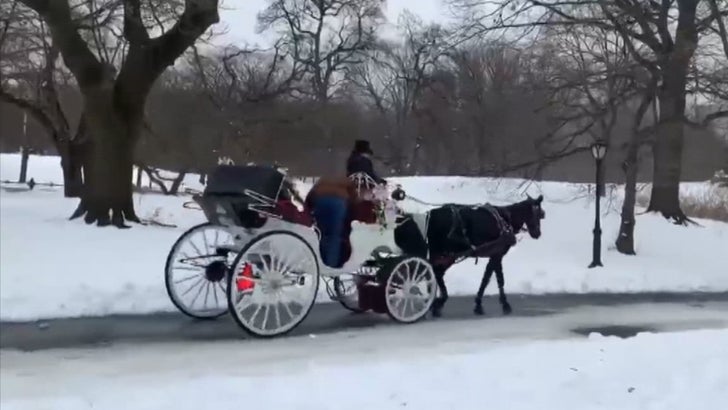 A horse pulling a carriage in NYC suddenly went down in a heap this weekend — but rather than get the animal checked out, the carriage driver kept on truckin’.

This scary incident went down Sunday in Central Park, and eyewitnesses tell NYCLASS (New Yorkers for Clean, Livable and Safe Streets) the horse was pulling its carriage with the driver and a couple of passengers in tow … when it collapsed on a slippery, icy road.

Pretty dangerous sitch for the horse … but, apparently, the driver (and spokesperson for Carriage Cavalry) got the horse back up on its feet, loaded his passengers back inside and continued on like nothing happened. No vet check for the horse … according to the witnesses.

The advocacy group, NYCLASS, is pissed and says it’s organizing a protest Monday to decry the cruel treatment of the horse. It’s been a longstanding issue in NYC — the care for those horses used to pull so-called handsome cabs for millions of Central Park tourists.

While they’re a familiar sight and tradition in Manhattan, many feel it’s time to hang up the reins and stop using the horses this way.

Unclear if this steed was ever given a proper examination, but its plight is now a rallying cry in one of NYC’s hot button topics.