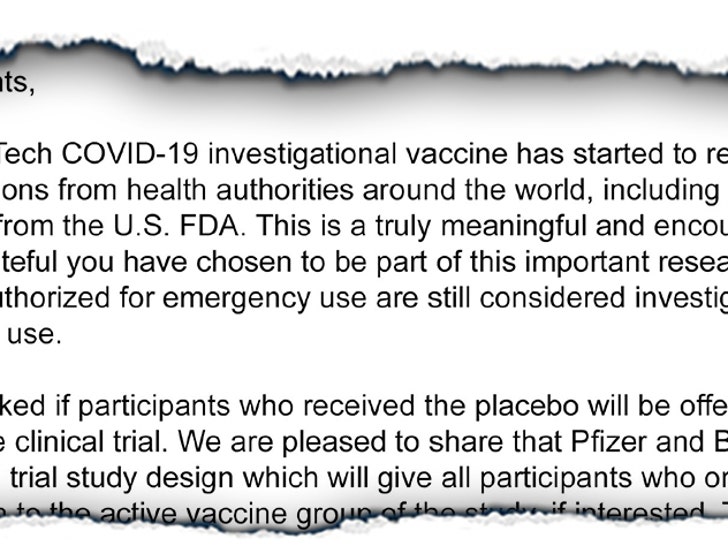 Membership has its benefits — people who participated in Pfizer’s vaccine trial, but only got the placebo, now have the chance to get the real vaccine earlier … TMZ has learned.

Sources with direct knowledge tell us Pfizer notified study participants earlier this week about the shift in policy — giving people who got the placebo the chance to get the shot as early as Friday.

We’re told some study participants, who got the placebo, were upset they had put their lives on the line, but were getting no benefit. In fact, Pfizer says 162 placebo patients ended up later coming down with COVID-19. By comparison … of the participants who got the vaccine, only 8 got infected later.

Pfizer emailed instructions this week to the study group about when they can get the vaccine. As with the general public, healthcare workers and nursing home residents will go first … as soon as Friday.

Others will get the opportunity in January or February … about 6 months after they got their second placebo shot.

We’re told no one during the study was told whether they’d gotten the placebo or the vaccine — but they all figured it out pretty easily. Those who got the vaccine felt ill — a normal reaction to the shot — while placebo patients were fine.

Hard to argue with these folks getting injected early … as they stepped up to be human guinea pigs, allowing for the development of a safe vaccine.