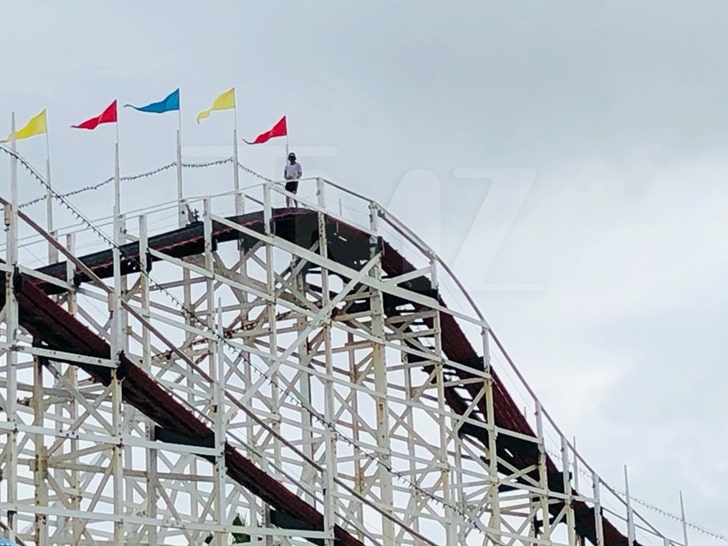 4:39 PM PT — San Diego PD tells TMZ … they got a call around 1:30 PM about a guy who’d climbed the fence at Belmont Park and made his way to the top of the ride. We’re told their negotiating team is out there now trying to get him safely down … as he’s threatened to jump.

A guy is threatening to jump off the very top of a roller coaster in San Diego … and authorities have been unsuccessful thus far in talking him down.

This is happening right now at what appears to be Belmont Park, atop the Giant Dipper attraction — also known as the Mission Beach Roller Coaster. As you can see, there’s a man up there at the highest peak (which is said to reach around 75 feet), looking out.

He’s not in a car — doesn’t look like the ride is even operating right now, but somehow … he climbed his way to the tip-top and has been screaming, making threats and acting erratically for at least an hour now, according to eyewitnesses. We’re told many on the ground there believe he’s prepared to jump … and that the fire department and police are on the scene.

We’re told the guy’s been pacing back and forth as negotiators try speaking to him, but thus far … no sign of him cooperating. Witnesses also tell us the man has yelled out that he’s 21 years old and that he’s “no fool.” There’s about 100 people scattered about watching.

It’s a delicate situation obviously — a fall from there would likely kill him, so the folks running point on this don’t wanna scare him into anything rash.

We’ve reached out to the police for more details … so far, no word back.