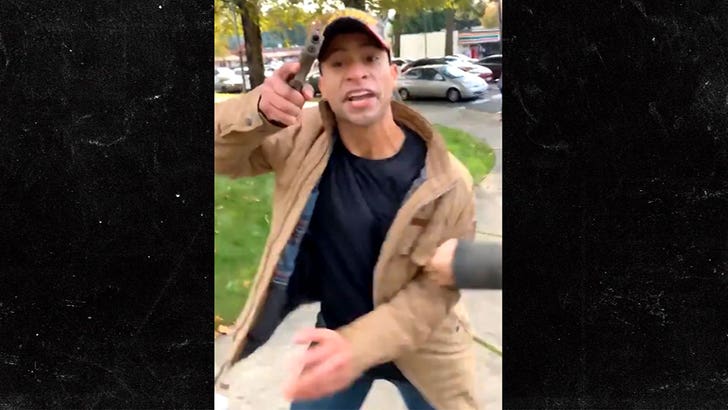 A Trump supporter was caught on camera pulling a gun on a group of protesters after getting splashed with some gunk — and now, cops are on the hunt for the gunk-hurler … seriously.

Check out this video that was posted this weekend from out in Woodinville, WA — just north of Kirkland. In the clip, you see a man — who was reportedly wearing a pro-Trump cap — waving a gun at a group of what appear to be mostly young, female demonstrators.

As soon as the pistol comes out, the person filming immediately notices and calls it out … while at the same time demanding to get his name, as well as the names of the people he seemed to be rolling with, who also looked like Trump supporters from their getups.

Eventually, he’s walked back by one of this friends … and the gun goes back to wherever he pulled it from. The woman berates him for threatening violence, and his excuse is … you guys dumped something on me. The lady claims it’s just water, and calls him a snowflake.

Cops were called, and after interviewing witnesses, we’re told it was relayed like this … 2 groups were protesting — pro-Trumpers and anti-Trumpers — and at some point, this fella gets liquid tossed on him with a 5-gallon bucket by an unknown assailant, who fled by foot.

Unclear what the liquid was — the dude claims it was a mix of spit and piss … but officers haven’t determined exactly what was inside. In any case, when they arrived, the gun-puller remained on the scene and cooperated with authorities. He was NOT arrested or cited.

Here’s the kicker … cops tell us they’re still looking for the alleged bucket bandit, whose act appears not to have been captured on tape. Brave new world, ain’t it?