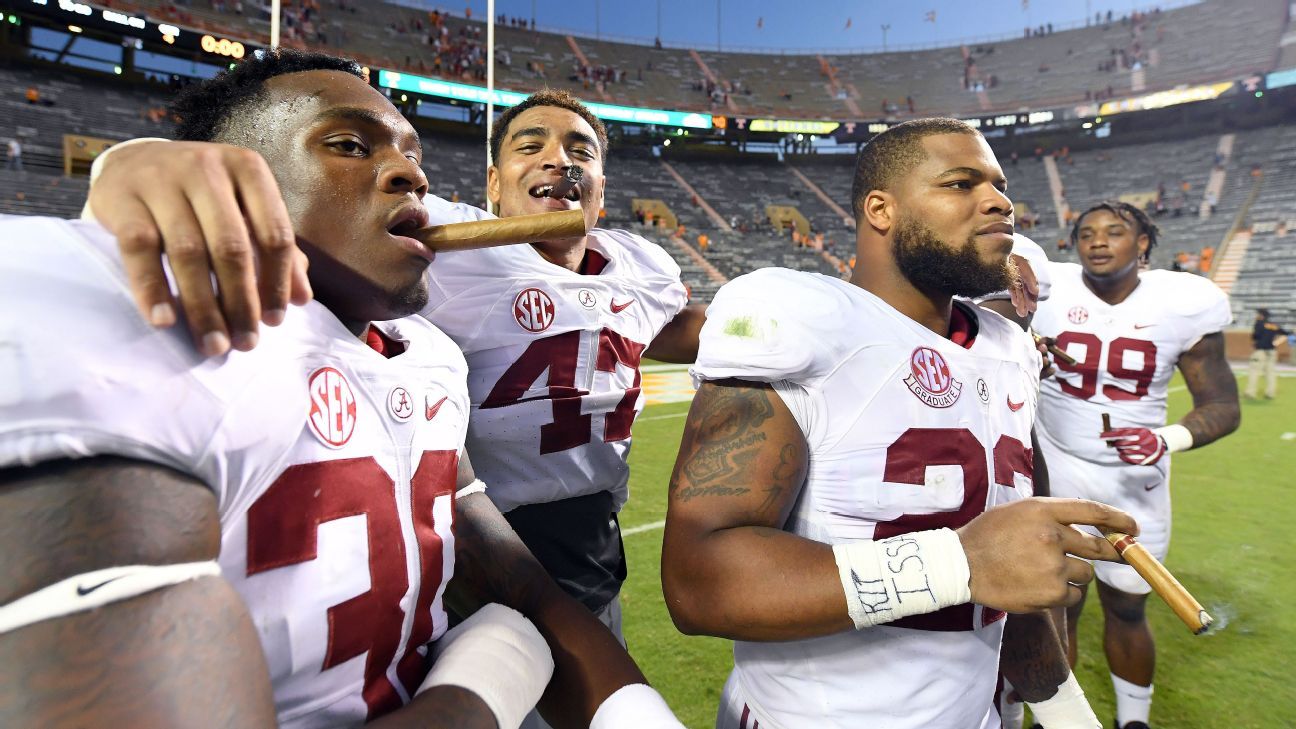 For going on 14 years, Alabama has beaten Tennessee every October, and every year coaches and players have enjoyed a traditional postgame cigar. You’ve probably seen the photos that pop up on social media around this time each year. The one of Derrick Henry puffing a stogie with his arm around Nick Saban is particularly memorable, the running back towering over his head coach.

Fans have gotten in on the action, too. Television cameras have often panned into the crowds in the fourth quarter to show plumes of smoke rising from the bleachers. And somewhere, whether in Bryant-Denny Stadium or at his home in town, Jimmy Tom Goostree has been watching it all with a smile on his face.

Jimmy Tom’s father, Jim Goostree, is the reason cigar shops in Tuscaloosa and Knoxville have a run of business the week of the rivalry that’s better known as the Third Saturday in October.

Jim was a longtime trainer at Alabama, but before that he was an assistant trainer at Tennessee. And like his boss, Paul “Bear” Bryant, he hated the Volunteers. So, the story goes, in the fall of 1961, Jim made a bet with the players on the team. Beat Tennessee for the first time in six years, he said, and he’ll dance around the locker room naked.

Whether by talent or precision or the promise of seeing Jim cut a rug, the Crimson Tide beat the Vols 34-3. And true to his word, Jim danced, albeit with a victory cigar pressed between his lips.

Thankfully, the stogie is the only part of the celebration that carried over.

“It’s a sense of pride for all of our family members,” Jimmy Tom said. “It means a lot that Dad is recognized this particular week.”

Bill Oliver was a senior on that 1961 team that started it all, and he remembers the elder Goostree as “a little short fella” and an excellent trainer. He had “a keen mind,” Oliver said, and he understood the rivalry with Tennessee better than almost anyone given his time with the program prior to coming to Alabama. Oliver said Goostree’s history paid off in that “the more knowledge you had, the more you could find out, the more we could smoke cigars.”

“Beating them was the ultimate,” Oliver recalled. “It really was.”

Jim Goostree died in 1999, and Jimmy Tom isn’t sure where all the time went. When he walks into his den, though, he’s reminded of his father. In a glass case, on the top shelf, is a football that’s nearly 50 years old. There are no markings on it to signify its importance, but Jimmy Tom knows.

It’s the game ball his father received after Alabama beat Tennessee in Knoxville in 1972. If Jimmy Tom closes his eyes, he can still remember what it felt like to walk into the visitors locker room that day, his eyes blurry from all the smoke, and seeing his father sitting by himself with a roll of tape in his hands. He has that football beside him, and he’s explaining how Coach Bryant gave it to him to hold onto.

Jimmy Tom recalls being a young boy and watching his father pack for those games against Tennessee. The last thing to go into the suitcase: a couple boxes of Tampa Nugget cigars. If Alabama won, Jim would hand them out to players and coaches. A loss meant Dad went back to the drug store to return his purchase and get his money back.

When Jimmy Tom thinks of his dad now, he remembers the sacrifice it took to be a part of the program under Bryant for all those years. Dad never was able to drive him to school in the mornings. Rarely could he pick him up at the end of the day. He’d miss holidays like Thanksgiving all the time.

But when he got older — when an errant tackle would no longer threaten to break his adolescent body — Jimmy Tom was allowed to go out to practice and see his father in action.

Oh how close Bryant and his father became through the years. On bus rides to and from games, Bryant would sit in the front row, with Jim across the aisle. They’d talk about the game and about life.

Jim flirted with leaving only once. In the late 1960s, the Dallas Cowboys called and Jimmy Tom said his father got past the second round of interviews. Then he returned to Tuscaloosa to find Bryant in his office, a copy of that day’s Wall Street Journal shielding the coach’s face. Jim told Bryant through the newspaper where he’d been and that he’d made a decision. He was staying.

Jim waited a minute and when nothing happened, he turned for the door. Then Bryant grumbled, “Jim, I knew you wouldn’t leave me.” And the newspaper never moved an inch.

Bryant died in January 1983 and Goostree helped the family with many of the funeral arrangements. As the buses were leaving Tuscaloosa for Bryant’s burial plot in Birmingham, it was Jim who told the driver to take 10th Street. He wanted the procession to pass the stadium and all the buildings that Bryant had helped construct. (Today 10th Street is Paul W. Bryant Drive.)

Almost a year later, when Goostree had a heart attack and was laid up in the hospital, a note from Bryant’s wife, Mary Harmon Bryant, arrived. In it, she said how sorry she was to hear what had happened and that she knew he would stay on top of those pesky doctors.

Then she changed the topic.

“I’d like to tell you a little about what he waited too long to say,” she wrote.

On the back side of the note, she continued.

“If Paul said it once, he told me a hundred times … that you were his most valuable person on the staff. He depended upon you & trusted you above all others.”

Mary wrote that Jim was Bryant’s “security blanket” and about how her husband relied on his opinion.

“I just hope you realize how much he loved you,” she wrote.

She added: “For all this I thank you too — from the bottom of my heart.”

Jimmy Tom has the note — dated May 31, 1984 — framed above his father’s old desk. Less than three months after writing to Goostree, Mary Harmon Bryant died at age 68 following a stroke.

“I say this beaming with pride: The relationship that he and Coach Bryant had was very close,” Jimmy Tom said.

The only real shame is that more people outside the Goostree family don’t know what an integral part Jim was to the Bryant dynasty — a dynasty that saw Alabama win six national championships from 1961 to 1979. Jim was a trainer for 27 years, and in 1984 he was promoted to assistant athletic director, helping to oversee a number of projects, including the expansion of Bryant-Denny Stadium. He was elected to the Alabama Sports Hall of Fame in 2017.

Jimmy Tom said his father intended to write a book about Bryant that would demystify the legend — that showed what a kind and caring man he truly was. But like Bryant’s own ambitions to set the record straight, Jim Goostree never got around to writing anything before he passed away.

Thankfully, Jimmy has that game ball and that note and many pictures of his father to remind him. The photo of his father after a win wearing nothing more than a towel, a police officer having just thrown ice on his back, is one that always brings a smile to the son’s face.

And every year, right around this time, Jimmy gets to hear his father’s name brought up again.

There’s General Neyland and Bear Bryant and Phil Fulmer and Nick Saban. But the Alabama-Tennessee rivalry is more than that. It’s a cloud of smoke and the story of a little-known trainer who managed to dance into the center of it all.

If you see photos of players puffing on cigars late Saturday night, think of Jim Goostree. He made a bet that’s still paying off today.