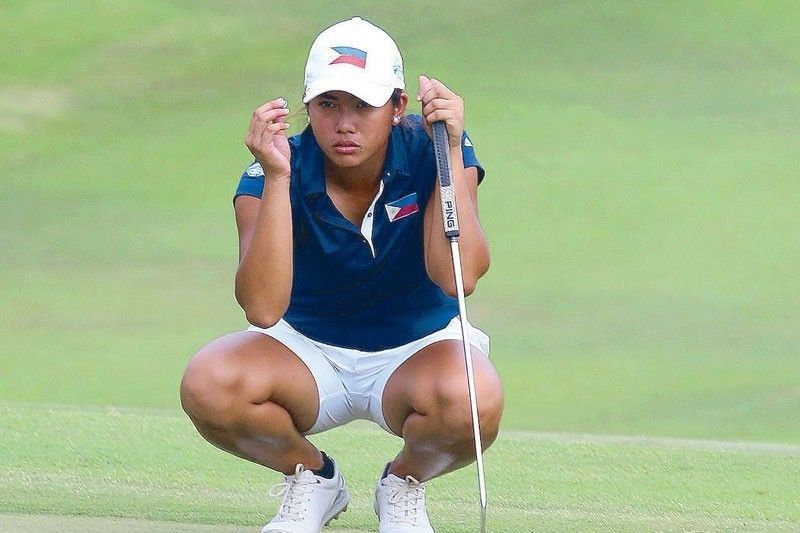 Closing birdies keep Pagdanganan in the hunt for breakthrough

Rookie Bianca Pagdanganan moved in a spot she described as “weird” behind not just her vaunted power but an iron game that continued to get better and putting that she hoped would deliver in time.

“It seems pretty surreal being in this position in my career but at the same time exciting,” Pagdanganan told The STAR after wrapping up her third round stint with back-to-back birdies for a 69 Saturday, keeping her within a shot off American Ally McDonald heading to the final round of the LPGA Drive On Championship–Reynolds Lake Oconee in Greensboro, Georgia.

Not since Jennifer Rosales annexed her second LPGA crown via a two-stroke victory over Cristie Kerr in the SBS Open at Turtle Bay in Hawaii in 2005 had a Filipina came tantalizingly close to an LPGA glory.

And Pagdanganan could be just that player to snap that 15-year spell that would net her $195,000 (P9.4 million) right in her maiden season.

Standing her way is McDonald, who also carded a three-under card at Great Waters for a 13-under 203 aggregate with world No. 5 and two-leg winner Daniella Kang dropping behind Pagdanganan’s 204 with a 205 after a second 70.

That sealed another shootout among these three players of diverse backgrounds with McDonald seeking to nail her first championship in five years, Pagdanganan shooting for a breakthrough in just her sixth tournament and Kang eyeing a third crown in this pandemic-shortened LPGA season and sixth overall.

A spoiler in flights infront of them could emerge as Spain’s Carlota Ciganda rallied with a 68 to seize solo fourth at 206, Aussie Katherine Kirk moving to fifth at 207 after a 70 and Americans Mina Harigae and Brittany Altomare joining former world No. 1 and two-time major winner Ariya Jutanugarn of Thailand, who slowed down with a 72, at 208 with 68 and 70, respectively.

But with a well laid-out game plan and positive mindset, the ICTSI-backed Pagdanganan is more than ready to take any of them – shot-for-shot, putt-for-putt.

“I don’t think I have to do anything different tomorrow (Sunday). I will just honestly trust my swing. I played good the past three rounds so I will just keep reminding myself to stick to my game plan,” said the 2019 SEA Games double gold medalist who is enjoying top form following a remarkable joint ninth finish in the KPMG Women’s PGA Championship, one of the Tour’s majors, in Pennsylvania two weeks ago.

Expect her to likewise keep his coach Carito (Villaroman) and dad Sam’s reminders all the way to the finish.

“They just said to play my game and imagine the ball going in the hole,” said the circuit’s driving leader, who also continued to amaze the field off the mound by the day. She normed 300 yards in her first round 68, tapered off with a 295-yard average in her second round 67 before uncorking a monstrous 310-yard norm Saturday, including a stirring 313-yard blast on the par-5 18th.

One behind McDonald and in a tie with Kang midway through the $1.3 million championship, the 22-year-old Pagdanganan birdied the par-5 second to find herself in the lead for the first time in her young career.

That, however, didn’t last long. For she would falter with missed green bogeys on Nos. 3 and 5 and fall behind by three. But she wouldn’t give up, fighting back with birdies on Nos. 7 and 9 before breaking a par-run at the back with closing back-to-back birdies.

She hit a 9-iron to within 12 feet on the par-3 17th then reached the last hole in two and two-putted.

What she expects to fall in the final reckoning are her putts. She made 29 in the first 18 holes, finished with 31 in the next and barely improved with 30 in the third.

“I just probably have to spend more time on the putting green,” she said.