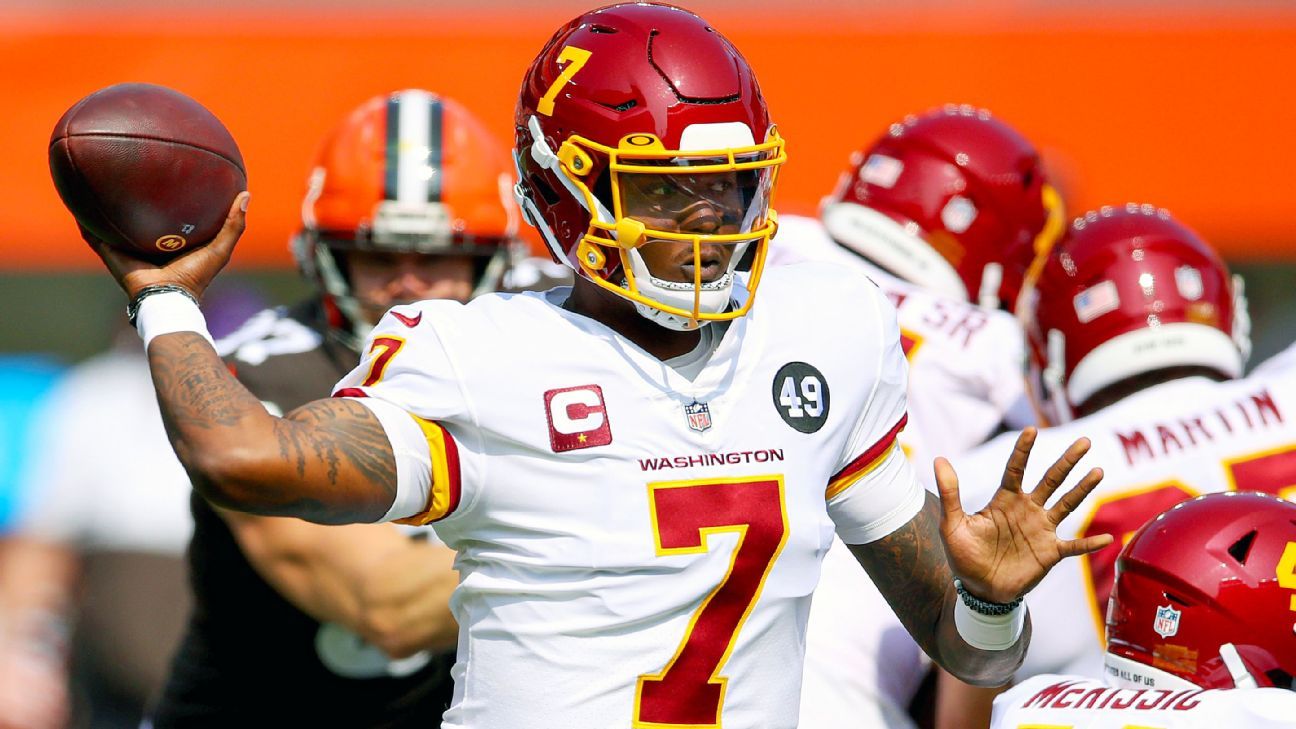 ASHBURN, Va. — Washington Football Team quarterback Alex Smith was ruled out of Sunday’s game against the Seattle Seahawks with a strained right calf, putting the team’s four-game winning streak and the NFC East lead in jeopardy.

Smith will be replaced by second-year QB Dwayne Haskins against the Seahawks (9-4). Haskins will make his first start since a Week 4 loss to Baltimore. Coach Ron Rivera benched Haskins after that game, saying the team wanted to see more growth — and multiple sources in the organization said he needed to do more preparation while not at the facility.

Now he’ll be tasked with helping Washington’s playoff chances. The team is 6-7 and owns a one-game lead over the New York Giants in the NFC East.

“I would say I’m pretty resilient,” Haskins said. “Life gets at you fast, and the biggest thing you can do is stand in the fire and walk through the flame and that’s what I did.”

Haskins replaced Smith in the second half of Sunday’s win over San Francisco. Smith said he entered the game with his calf feeling a little sore and it progressively got worse.

Smith did not practice this week. Rivera said Smith went through some drills and told the staff his calf still felt tight.

“We’re not going to push it,” Rivera said. “We’ll see how he progresses next week.”

Though Smith’s stats weren’t eye-popping — in his five starts, he threw three touchdowns and three interceptions — his impact on the offense was pivotal. Rivera and multiple players said Smith had a calming influence on the team’s young players. He also helped the offense by being able to go through his progressions properly and set the protection well. That helped contribute to a 4-1 record when Smith started.

Haskins opened the year as the starter, though Rivera said that was partly a byproduct of not having any preseason games. Rivera said he would have had a competition for the starting job had they had a typical training camp. But with a shortened camp, Rivera wanted Haskins to get all the first-team reps to prepare for the season.

Rivera said he just wants Haskins to be consistent.

After putting in extra work, Haskins said he will be “calm and cool, collected, confident. … When I was playing previously, I was so caught up in trying to make big plays, trying to show I belonged. Well, I’m here. It’s time.”

Haskins led Washington’s offense to a field goal on his first drive of the third quarter vs. the 49ers. He nearly was intercepted in the fourth quarter when an errant pass to an open Terry McLaurin sailed on him over the middle.

After the game, Haskins said he’s focused more on his game preparation; last year’s staff criticized him for the same issue. Washington wanted him showing up earlier to the facility and staying later, among other things. Haskins also had worked with some of the team’s practice squad receivers away from the facility after practice.

“I can still spin it,” Haskins said. “It’s never been a question about that. The biggest thing this week is getting back into the rhythm.”

And maintaining his confidence.

“You’ve got to believe in yourself before anyone else can believe in you,” Haskins said. “So I’ve been praying. I called my pastor, called my dad, playing a little bit of spiritual warfare, so I’m excited.”

Rivera said he was encouraged by Haskins’ first couple of series against the 49ers.

“He had a little rhythm,” Rivera said. “We were in good situations — first-and-10, second-and-medium, third-and-short. It’s conducive to seeing those things better with him. He has an opportunity, and I’m excited to watch him.”

Offensive coordinator Scott Turner said one big plus for Haskins has been being around a veteran like Smith. Haskins has said he looks up to Smith. Turner said he’s noticed Haskins asking questions in meetings that suggest he’s more prepared. The coaching staff wanted Haskins to be able to call the plays better in the huddle and to be better at taking what he learned in meetings onto the field.

“I learned so many things from Alex I couldn’t pinpoint one thing,” Haskins said. “Learning from him and seeing his day-to-day grind, how much work he puts in. Try to get here at the same time or earlier when he gets here or leave at the same time or later. He’s done it right, so I try to follow in his footsteps.”

Washington also will be without starting linebackers Kevin Pierre-Louis (ankle) and Cole Holcomb (concussion). Antonio Gibson, who participated in running back drills Friday, is listed as doubtful with turf toe. He did not play against San Francisco.

Hollywood Viral – Joe Exotic Not Giving Up on Pardon, Pivoting to Biden Administration