Sports News – UFC 257: Everything you need to know about Conor McGregor vs. Dustin Poirier 2

Conor McGregor's 2020 fell well short of his expectations. He had planned to fight at least three times, with one of those being...
More 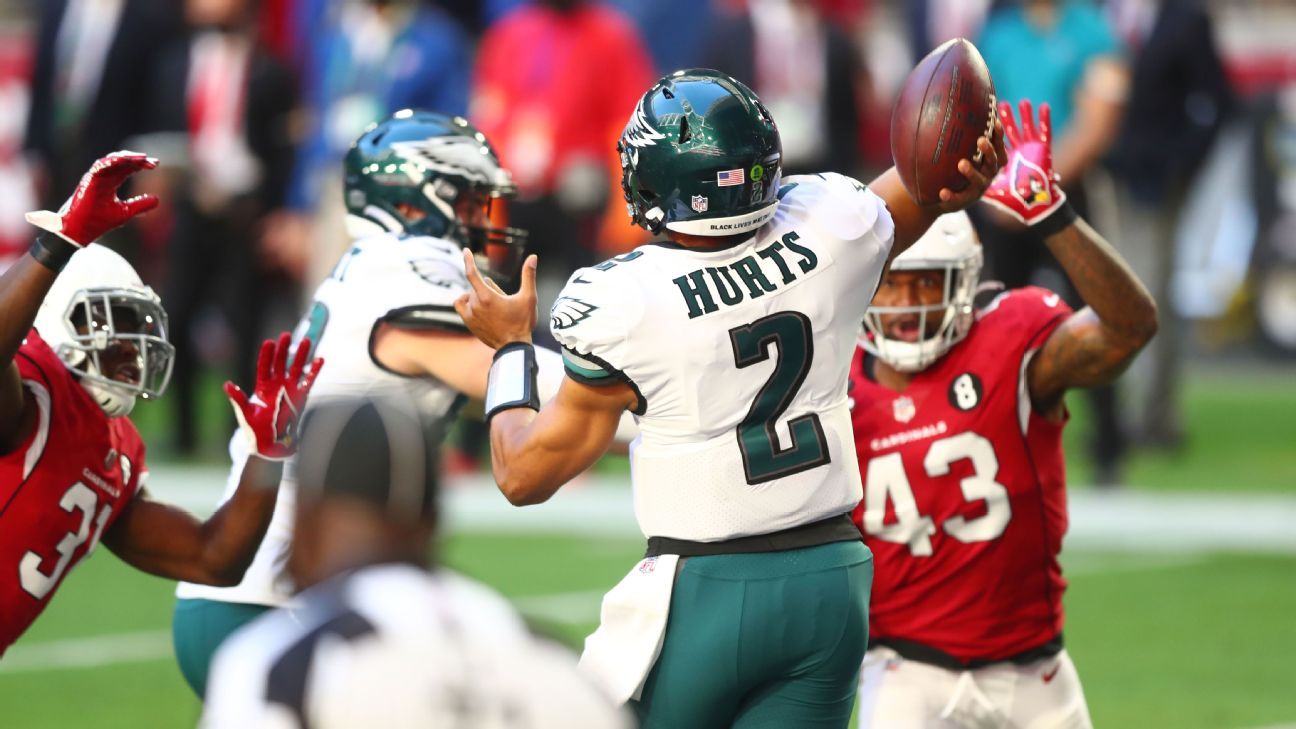 The quarterback drama in Philadelphia is heating up.

Rookie Jalen Hurts made a strong case for why he should continue as the Philadelphia Eagles‘ starter, tossing three touchdowns and running for another Sunday in a wild 33-26 loss to the Arizona Cardinals, on the same day that it became clear Carson Wentz isn’t interested in sticking around in Philadelphia if he remains the backup.

Hurts ended 24-for-44 for 338 yards and rushed for 63 yards in a comeback bid that fell just short on the road.

Wentz is not pleased with the way events have unfolded in the organization and wants to move on from the Eagles if the current situation continues, sources told ESPN’s Adam Schefter, adding another pressure point to a quarterback situation that promises to dominate the offseason.

“Carson has done everything we’ve asked him to do. He’s a pro. He’s engaging, he’s helping Jalen,” said coach Doug Pederson. “I get it and I understand it’s a frustrating situation for him but at the same time I see him helping Jalen and helping our offense.”

The Eagles are committed financially to Wentz after giving him a four-year, $128 million extension in the summer of 2019. They would face a dead-cap hit of around $60 million if they cut him and would take a cap hit of more than $30 million in a trade.

But Hurts is expected to hold onto the starting gig for the rest of the season, and if his strong play continues, it would be a hard sell for management to hand the keys back to Wentz for 2021 with no questions asked.

Hurts became the first Eagle with three passing touchdowns and a rushing score since Nick Foles in 2013. He caught fire in the second quarter, tossing three scoring passes to help erase a 16-0 deficit and bring the Eagles within six at halftime.

He tied the score with a 7-yard rushing touchdown late in the third quarter, but the Eagles (4-9-1) were unable to close the deal in the fourth despite knocking on the door several times, including at the end of the game when a pair of Hail Mary attempts in the end zone fell incomplete.

Hurts has thrown five touchdown passes to one interception and has rushed for 198 yards and a score in two-plus games since taking over for Wentz, who struggled through the first 12 games of the season. He is the first player in NFL history with 500 passing yards and 150 rushing yards in his first two career starts, per Elias Sports Bureau research.

“I thought he had great poise out there, great leadership, played obviously physically tough, mentally tough,” said Pederson, who added he would likely announce a starter for next week’s game against the Dallas Cowboys Monday, though there’s little doubt it will be Hurts. “He’s doing a good job. I would say there’s still room to grow obviously, just learning the details of our game, he can get better there, but he gave us an opportunity to win today.”

If Philadelphia elects to move on from Wentz, it must act by the second day of the 2021 league year because his $22 million base salary for 2022 becomes fully guaranteed and his 2021 roster bonus of $10 million is paid out on the third day of the league year.