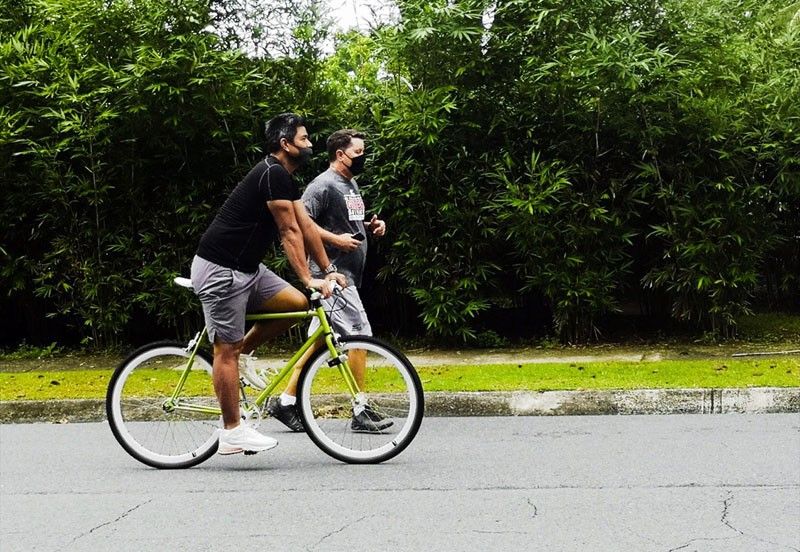 Jolas wants to ride his bicycle

SMART CLARK GIGA CITY, Pampanga, Philippines — NLEX assistant coach Jojo Lastimosa holds the distinction inside the PBA bubble as the only participant to have brought his own bicycle here.

It seems that the 10-time PBA champion, a superstar in his own right, can’t live without a bicycle these days.

“It gives you a sense of sanity and normalcy like you’re outside the bubble at least,” said Lastimosa.

During his free time, the former Purefoods and Alaska ace makes sure he gets around the vast Mimosa Leisure Estate on his bike.

One time, he found his former coach with Alaska and now Ginebra mentor Tim Cone, as companion. The latter opted to run beside the 56-year-old Lastimosa, an avid rider the last 15 years, in normal times.

Lastimosa said he keeps three bikes at home, and had gone to ride to as far as Bataan, and has celebrity Gary Valenciano as one of his riding buddies.

He lets other players and coaches inside the bubble borrow his bike at times, sharing the beauty and essence of cycling as action in the PBA Philippine Cup heats up.

“It’s a big thing here,” he said of his lime green bicycle with white-wall rims.

Vic Manuel of Alaska (5-3) and Beau Belga of Rain or Shine (4-1) were hailed as the Cignal TV-PBA Press Corps co-Players of the Week after leading their respective squads to comfortable positions heading into the Philippine Cup playoffs.

NLEX guard Mike Ayonayon, meanwhile, has been named the PBAPC Rookie of the Week, an honor given by the members of the media covering the PBA beat.

A total of 86 players and coaches participated in the PBA Hair Cut by Folk Barbershop that lasted two days here.

San Miguel coach Leo Austria was one of the personalities who made it to the final cut-off yesterday. It was the first time such service was offered inside the bubble.

“Gupit-gwapo” for the PBA delegates resumes on Nov. 22.

All 12 teams have yielded negative results in their third cycle of mandatory swab testing while the remaining members of the 350-strong entourage made up of officials, staff and media are scheduled to be tested this week.

Testing for those inside the bubble is required once every 14 days in accordance with the protocols of Clark Development Corp. (CDC), Inter-Agency Task Force (IATF) and Department of Health (DOH).

Two false positive cases have been recorded the past couple of weeks, forcing officials to call for a four-day recess and the chance to reinforce the existing health and safety protocols.

Entering its second month, the bubble is intact, and has remained COVID-19-free.