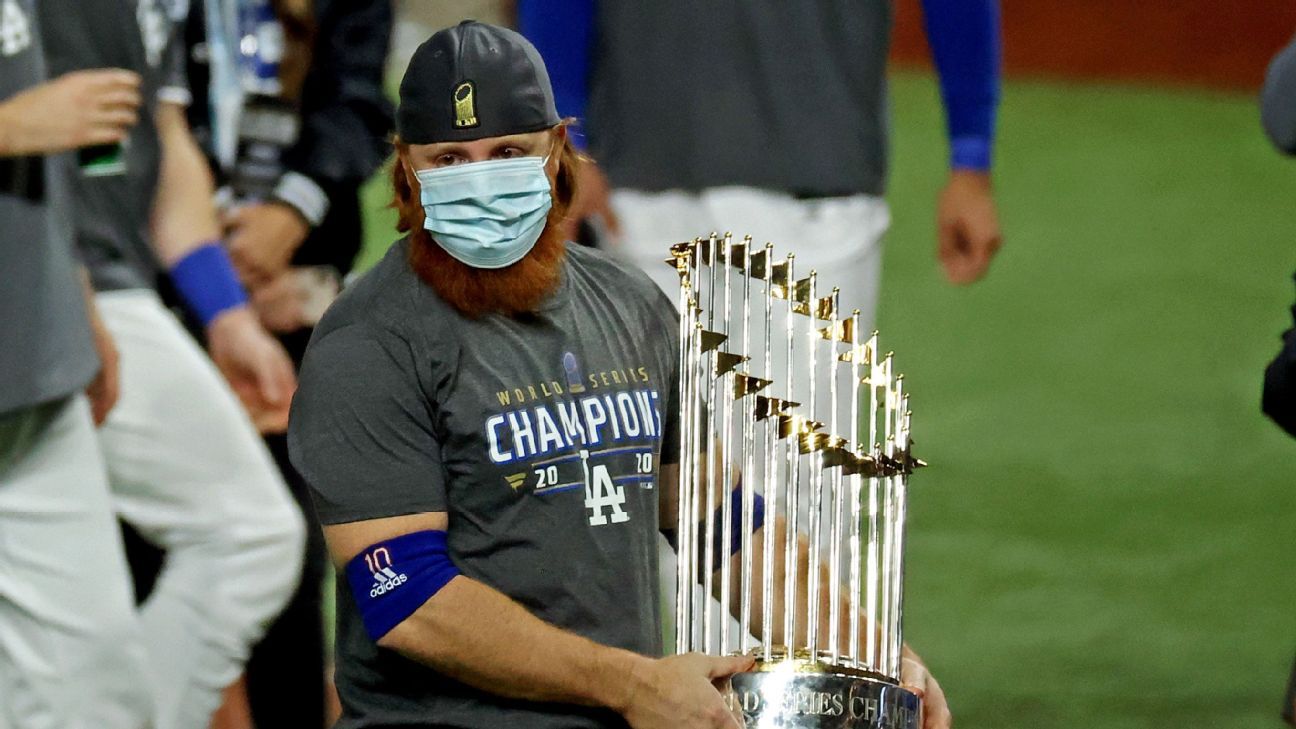 Los Angeles Dodgers third baseman Justin Turner tested positive for COVID-19 and was pulled from the team’s World Series-clinching 3-1 win in Game 6 against the Tampa Bay Rays on Tuesday night in Arlington, Texas.

MLB commissioner Rob Manfred confirmed the positive test after the game, telling Fox: “It’s a bittersweet night for us.”

Turner was 0-for-3 with two strikeouts before coming out of the game to start the eighth inning. The team did not give a reason for his exit when he left.

“Thanks to everyone reaching out!” Turner tweeted after the game. “I feel great, no symptoms at all. Just experienced every emotion you can possibly imagine. Can’t believe I couldn’t be out there to celebrate with my guys! So proud of this team & unbelievably happy for the City of LA #WorldSeriesChamps.”

Major League Baseball insulated postseason teams in neutral-site bubbles after traveling them across the country during a shortened 60-game season. Turner was the first player since the playoffs began to be flagged for the coronavirus.

The veteran infielder was not immediately with his teammates as they celebrated the franchise’s first World Series title since 1988. But the 35-year-old did return to the field with his wife about an hour after the game and took photos with the World Series trophy. He got a hug from longtime teammate Clayton Kershaw and sat front and center next to manager Dave Roberts for a team photo, occasionally lowering a mask he otherwise wore throughout the celebration.

Sources told ESPN’s Jeff Passan that Turner had been asked to isolate after the positive test but that no one stopped him from going on the field to celebrate.

Sources told Passan that, in the second inning, the lab doing COVID-19 tests informed MLB that Turner’s test from Monday came back inconclusive. It is unclear why the results of the test arrived after the game began, as they typically do beforehand. Samples taken from Tuesday arrived at the lab and Turner’s was run immediately, sources said. When it showed up positive, the league called the Dodgers and said to pull Turner.

He was replaced in the field by Edwin Rios.

“We learned during the game Justin tested positive, and he was immediately isolated to prevent spread,” Manfred said.

When the Dodgers return to their hotel later Tuesday night, everybody will be given a rapid PCR (polymerase chain reaction) test, sources told Passan.

Mookie Betts, when asked about Turner returning to the field to join the Dodgers for a team picture, defended his teammate.

Andrew Friedman, the Dodgers’ president of baseball operations, said he hadn’t seen the photo of Turner sitting next to a maskless Roberts and the rest of the Dodgers for a team picture.

“If there’s people around him without a mask, that’s not good optics at all,” Friedman said, adding that the upcoming PCR tests the team will take will be important.

“Now it’s important we all test negative … to make sure we don’t go out and spread this to other people,” Friedman added.

A late-blooming slugger who helped reshape the game by succeeding with an uppercut swing, Turner is Los Angeles’ career leader with 12 postseason home runs, including a pair in this Series, in which he hit .364 and played stellar defense.

“It’s gut-wrenching,” World Series MVP Corey Seager said. “It hurts me. I can’t imagine how he feels. If I could switch places with him right now, I would, because that man more than anybody deserves to take a picture with that trophy, celebrate with us, have his family around and enjoy this moment, and that got taken away from him, and that’s not right. That doesn’t sit well with me.”

Said Kershaw: “I’m sure it’s really hard tonight, and we all feel for him, but I hope he can take solace in the fact that we’re not here without him. He’s been our guy for a long time. He’s done so many incredible things for this organization. He’s been the rock in the postseason for us every single year.”

Information from The Associated Press was used in this report.