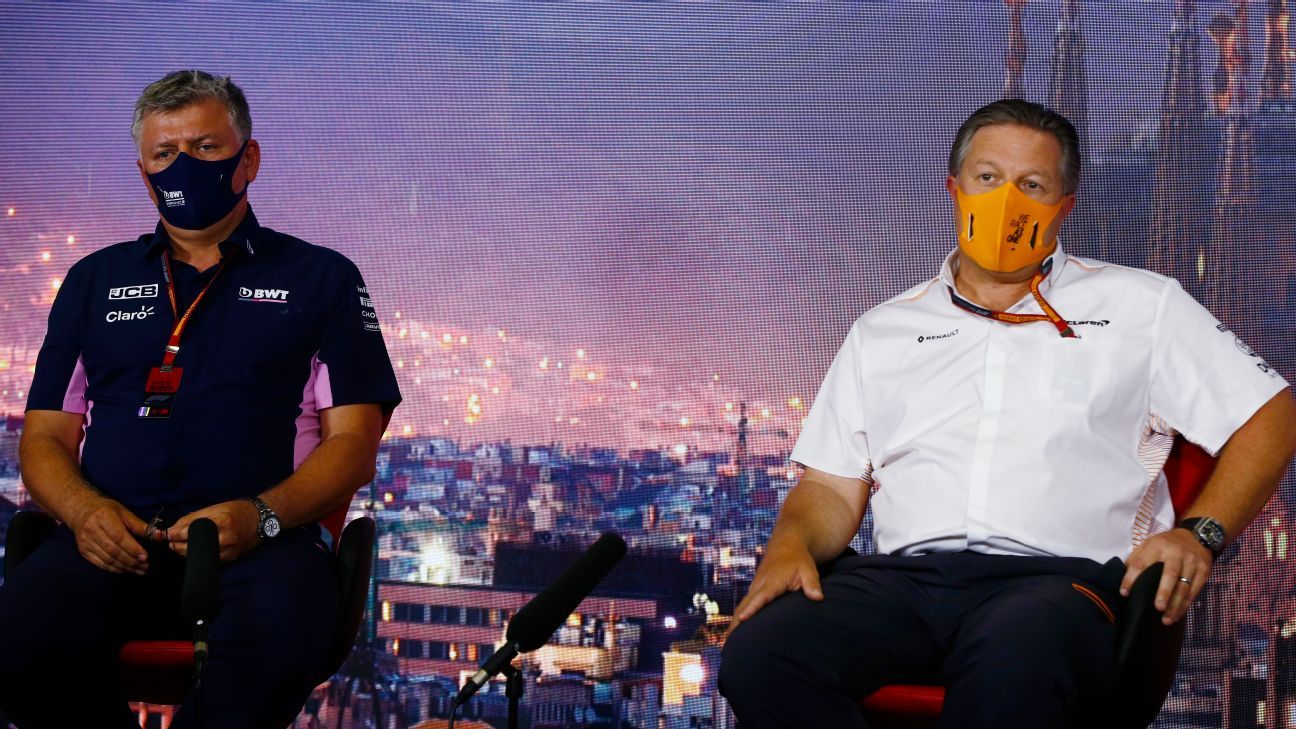 McLaren CEO Zak Brown says his team would have acted differently to Racing Point had one of its drivers showed the same symptoms Lance Stroll experienced at the Eifel Grand Prix.

Stroll missed the race due to an upset stomach but was not tested for COVID-19 until he had travelled home on Sunday night. The test came back positive, meaning Stroll likely had the virus while he was in the paddock at the Nurburgring on the Thursday and Friday of the event.

Under the FIA’s COVID Code of Conduct, teams are required to report symptoms, test individuals with symptoms and quarantine individuals who have been in contact with a positive case. None of the above happened in Stroll’s case and the team failed to report the case to the FIA for a week after Stroll had tested positive.

Racing Point has defended its actions by saying it sought medical advice through Stroll’s personal doctor in Switzerland, who believed the driver’s symptoms were not in line with COVID-19 and therefore did not warrant a test.

But Brown, whose McLaren team had a positive case at the cancelled Australian Grand Prix in March, said he was surprised at how Racing Point dealt with Stroll’s illness.

“For McLaren, we put our people first and foremost, we won’t take any risks, we won’t gamble,” he said. “We recognise how dangerous this [the virus] is, we want to make sure everyone stays healthy and continue to put on grands prix.

“I think the sport has done a good job, there has been more cases, Racing Point being most visible recently. We do a tremendous amount of testing, we take full precaution. I think we all need to look after each other’s back. If I look at the Racing Point incidents, I would probably test anyone who isn’t feeling well daily.

“In Australia, we had someone who didn’t feel well, Andreas and I aren’t doctors but we took a quick decision to isolate. Once the test came back positive, we isolated the team. Ultimately we knew it would shut us down for the race. “I know the [Racing Point] doctor didn’t think a test was positive, maybe in hindsight, that should have been different.

“I don’t know who the doctor is. I don’t know if it was Dr [Vijay] Mallya, Dr Seuss, maybe it was Dr Dre. Maybe next time around, we should be testing when anyone has any sorts of symptoms because we know how dangerous this is.

“I know when we had our issue in Australia, we communicated it very quickly to everyone, as we have a moral obligation to people’s health. [Regarding Racing Point], I don’t know the details, I just know what I read and see, and it looks like there wasn’t immediate transparency.

“For an entity that tests as much as they do, all I know, we would be testing anyone at McLaren who doesn’t feel well daily, to make sure that person is healthy and not transmitting, and then would isolate anyone who is around them immediately.”

Ahead of this weekend’s Portuguese Grand Prix, Racing Point team principal Otmar Szafnauer made the remarkable claim that his organisation tests its staff for COVID-19 more than any company in the world.

“I do want to point out to everybody that we test more than any other business on the planet,” he said. “Not just Formula One teams, any other business on the planet. “I test every employee twice a week at the factory, we have done more than 15,000 tests, we’ve had six positives, we test and take this virus more seriously than anybody. We test all of our staff upon arrival from a grand prix so they have the piece of mind when they go home that they don’t pick anything up.

“We’re the only ones that do that — nobody else.”