Wish 107.5 is more than just an all-hits station. More than playing your requests, we are here to keep you company and grant your...
More

Pinoy Issues
More
Home Sports Sports News – Monken: Army ‘should not be left out’ of bowls 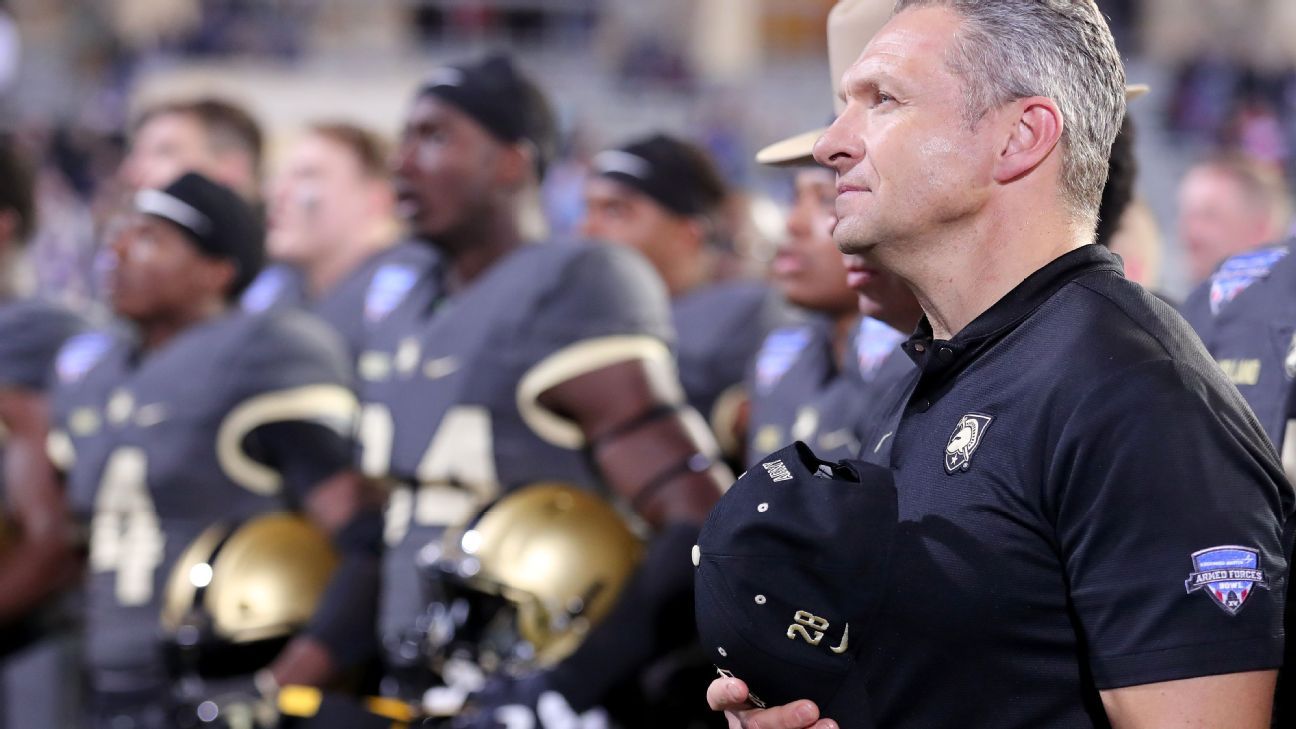 Army coach Jeff Monken woke up early Sunday, anxious to find out who his team would face in a bowl game.

The Black Knights had posted a 9-2 record, capped by Saturday’s victory over Air Force that secured them the Commander-in-Chief’s Trophy. Army had an agreement to play in the Radiance Technologies Independence Bowl against a Pac-12 opponent. By mid-afternoon Sunday, Army thought it would have the matchup secured.

After a surge of Pac-12 teams opted out of bowl season and other teams, according to Monken, threatening to opt out if paired against Army, the Independence Bowl canceled its game and the Black Knights were left without a postseason destination. Monken and Army administrators informed the team following dinner at a 6:15 p.m. ET meeting.

“We had guys in tears,” Monken said. “We pulled off the biggest wins of these seniors’ career, they just won the Commander-in-Chief’s Trophy back, that’s going to be their legacy, and they’re looking forward to playing in a bowl game one time together, before they go off in the United States Army, and we’re sitting here telling them, ‘Sorry, guys, you can’t play.’

An FBS independent, Army secured an agreement to play in the Independence Bowl in 2020, 2022 and 2024 as long as it was eligible. Although the Football Bowl Association lifted the six-win minimum to qualify, Army still celebrated its bowl appearance after securing its sixth win Oct. 24 against Mercer.

Monken said he was concerned when Pac-12 teams began opting out of bowl season late last week. But he still thought Army would find an opponent for the Independence Bowl, which has been played in 44 consecutive years.

Monken praised SEC commissioner Greg Sankey for the league having 12 of 14 teams participating in bowls, even several, such as South Carolina and Mississippi State, with losing records. He noted that several teams seemed intent on participating in the postseason until losing games this past weekend.

“USC, a week ago, was saying, ‘We deserve to be in the College Football Playoff if we go undefeated and win the Pac-12 championship,'” Monken said. “And the Pac-12 was saying, ‘An undefeated Pac-12 team deserves to be considered.’ So they go to the Pac-12 championship against Oregon and lose and they go from wanting to go to the College Football Playoff to not wanting to play at all? I don’t get it. Boise State opted out today. They lost their championship game yesterday. So they went from being their conference champion and representing their conference in a bowl game to opting out? You couldn’t go one more week and play us?

USC cited a recommendation from its medical team for why it opted out. And if USC hadn’t opted out, it would have been almost guaranteed to play in the Alamo Bowl, which would have bumped Colorado to the Independence Bowl as Army’s opponent.

Monken added that the situation is particularly unfortunate because neither Navy nor Air Force will appear in a bowl game this season.

“I’m not pointing the finger at any one person,” he said. “It’s just collectively, as a bowl season, whatever the system is, a 9-2 team should not be left out and a 9-2 Army team should not be left out. I don’t know how we have an Armed Forces Bowl and a Military Bowl and a First Responders Bowl and at all of these bowl games, we’re going to have service members coming back and being reunited with their families, we’re going to put it on TV and it’s going to be a feel-good story, and you’re going to leave the Army team at home.

“How much bull is that? Somebody’s got to fix that.”

After Monken broke the bowl news, Army’s seniors met and agreed to remain on campus and continue practicing until Thursday morning, in case another participating bowl team cannot play because of COVID-19 tests or other reasons. If Army can’t find a bowl spot, players will be dismissed to return home for the first time since May. But if a bowl spot opens up, Army will be ready. Athletic director Mike Buddie issued a statement Sunday saying the academy would “continue to fight to get them that opportunity.”

Monken said the team would need only a day to arrange travel and reach the bowl site. He noted the team’s season-long motto: Don’t plan. Prepare.

“If we got a Dec. 31 bowl game, if you call us on the 29th, we’ll have those guys flying there on the 30th,” Monken said. “What I’m hoping is some of these bowl games, when they hear enough of this about Army, they’re going to say, ‘You know what? If somebody cancels, we’re going to take Army. We’re going to be the knight in shining armor and we’re going to look like a hero taking this team.’

Monken doesn’t blame the Independence Bowl at all, saying, “They worked hard. They were in tears. They wanted to have this bowl game and they wanted to host us and they tried to get an opponent, and people kept turning them down.”

He said he also understands the contracts bowls have with conferences and their members.