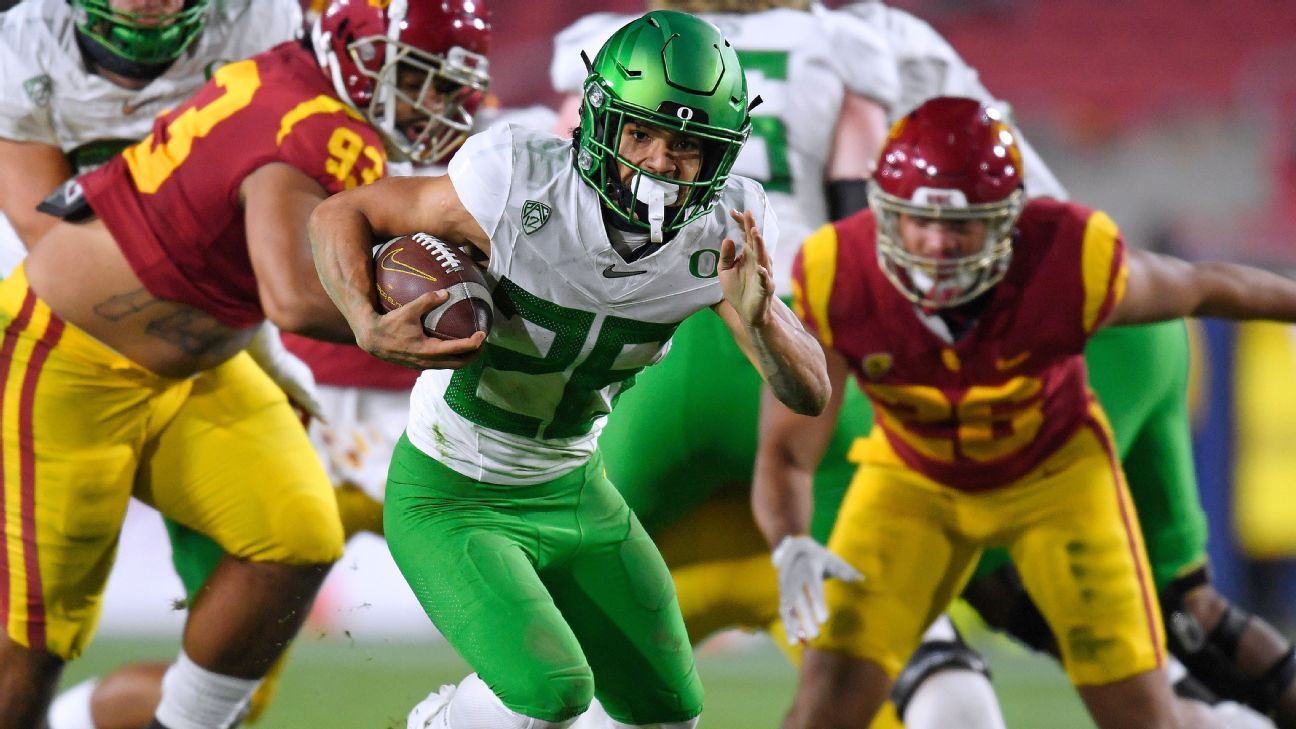 LOS ANGELES — Oregon didn’t win its Pac-12 division, and it only got into the championship game because Washington had to drop out. The Ducks hadn’t won a game in nearly a month before they took the Coliseum field Friday night.

They still ended up celebrating amid confetti and streamers in their rivals’ empty stadium.

After yet another display of the big-game poise their West Coast foes so often lack, the Ducks are back-to-back conference champions.

Anthony Brown threw two touchdown passes in his unusual Oregon debut, Jamal Hill made his second interception with 2:47 to play and the Ducks won their second straight Pac-12 title with a 31-24 victory over No. 13 USC.

“We fought this year,” said Thibodeaux, a Los Angeles native. “So many trials and tribulations. So many things that kept popping up. So many excuses we could have made, and we didn’t flinch. We stuck to the script and got it done.”

Tyler Shough also threw two touchdown passes for the Ducks (4-2), who claimed the Pac-12’s New Year’s Six bowl berth despite having more losses than USC, Washington or Colorado. The Trojans were one win away from an unbeaten regular season before the Ducks took charge with a superb defensive effort and timely offense throughout the night.

“We were itching to get back to our kind of football, and we did it tonight,” coach Mario Cristobal said. “(We) really just came out with an attitude, came out with a purpose and a mission.”

Jaylon Redd, Hunter Kampmoyer, DJ Johnson and Travis Dye caught TD passes for the Ducks, who got into the title game after consecutive losses only because the Huskies had to drop out Monday due to coronavirus problems.

Despite losing its two previous games to Oregon State and California, Oregon seized the opportunity to continue its domination of the Trojans on the way to the school’s sixth Pac-12 championship in 12 years and its record fourth championship game victory.

When Thibodeaux was asked whether a championship won in 2020 should have an asterisk, he replied: “Everybody who’s not a winner is going to say that, so who are we leaving it up to? The winners or the losers?”

Kedon Slovis passed for 320 yards with two touchdowns and three interceptions for the Trojans (5-1), whose perfect season ended with their fourth loss in their last five meetings with Oregon. The sophomore quarterback had X-rays on his shoulder after the game.

USC fell behind 14-0 in the opening minutes after two interceptions from Slovis led to TD drives by the Ducks — and unlike every other game this season, the Trojans never caught up.

“There’s a lot of hurt souls in our locker room right now,” USC coach Clay Helton said. “I know our kids wanted extremely badly to win a championship, and we came up a play too short today.”

Oregon had a 31-17 lead with less than 10 minutes to play, but Bru McCoy caught a TD pass on fourth down for the Trojans before they got the ball back with 4:43 left. USC reached midfield in search of a fourth-quarter comeback win for the fourth time in its six-game season, but Slovis threw the first fourth-quarter interception of his career.

Hill made an acrobatic play to hang on to the poorly thrown ball, and Oregon’s offense ran all but 23 seconds off the clock. USC reached the Oregon 49, but the Ducks’ pass rush prevented Slovis from getting off a Hail Mary.

“We didn’t have any doubt at all,” USC receiver Drake London said. “We believed in each other to just try to go out there and execute it. Unfortunately we just ended up short.”

Amon-Ra St. Brown caught a TD pass before spraining his shoulder late, and Markese Stepp rushed for a score for the Trojans, who had a horrible start to their third game in 13 days.

The Ducks stunned almost everybody in the mostly empty Coliseum by replacing Shough occasionally with Brown, a senior graduate transfer from Boston College who hadn’t recorded any statistics for Oregon this season.

Brown’s first throw for the Ducks was a TD pass to Redd on Oregon’s opening drive. He threw another scoring pass to Dye in the third quarter, finishing 3-of-4 for 17 yards in an offensive package set up for short-yardage situations and goal line chances.

“He’s a really good player, and he deserved to play somehow, some way,” Cristobal said. “Not only that, he provided an advantage for us in the (run-pass option) world. We all very much appreciate Anthony for hanging in there throughout the season, because it’s a position where one player is playing for the most part.”

Oregon: The well-rested Ducks seized their golden opportunity to make another big postseason splash. Cristobal’s team has a mental toughness that the Trojans haven’t matched in years, and that’s why Oregon will be bowling in the New Year despite all of its flaws this season.

USC: The Trojans finally fell off the high wire that was their season, but in predictable fashion with turnovers, poor blocking and too many missed tackles. USC wasn’t a perfect team despite its perfect record, and everything caught up to the Trojans in another setback for the perpetually embattled Helton.

Oregon: A probable berth in the Fiesta Bowl on Jan. 2, although it isn’t clear-cut.

USC: A probable berth in the Alamo Bowl on Dec. 29.