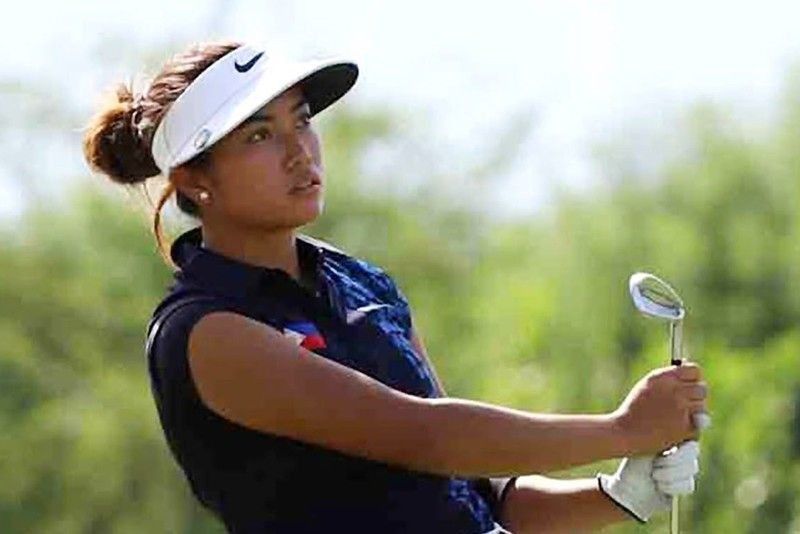 MANILA, Philippines — It took Bianca Pagdanganan the backside nine to figure out the Great Waters course and when she did, there was no stopping the rookie Filipina from getting into the mix in the LPGA Drive On Championship-Reynolds Lake Oconee in Georgia Thursday.

Outdriving herself, Pagdanganan scorched the par-72 layout’s frontnine with five birdies against a bogey for a 32-36 card, claiming a spot at joint sixth with former Major winner Pernila Lindberg of Sweden and American Marissa Steen, just three strokes adrift of a hot-starting pair of world No. 5 Daniella Kang and fellow American Jennifer Song at the start of the $1.3 million event in Greensboro.

She spiked that late birdie run with three straight from No. 1 then bounced back from a bogey mishap on No. 5 with birdies on Nos. 6 and 8 to dish out her best start in her first six tournaments in the world’s premier ladies circuit.

The 2019 SEA Games double gold medalist actually looked headed for another mediocre start with a bogey on No. 13 against a birdie on No. 15 but found her range, rhythm and touch in the last nine holes to fuel an impressive start that bested her opening 69 in the Marathon LPGA Classic in Ohio last July.

And she spiked it with an astounding 300-yard norm off the mound in windy afternoon that surpassed her Tour average of 286 yards that has kept her on top of the driving category for some weeks now.

The ICTSI-backed ace, brimming with confidence coming off a joint ninth finish in the KPMG Women’s PGA Championship in Pennsylvania two weeks ago, missed five fairways and failed to reach regulation four times but bucked the unreceptive greens and finished with 29 putts.

Kang, who swept the first two legs of the pandemic-shortened LPGA season, including the Drive On Championship, also last July in Ohio, took charge again with a solid seven-under 65, which Song tied with a sizzling backside start that featured four straight birdies from No. 12.

Kang, who turned 28 Monday, yielded some 46 yards off the tee to Pagdanganan but had been so consistent with her all around game, finishing with just one missed fairway and green and wound up with 29 putts. She gunned down four birdies at the back then added three more in the last nine holes

Song, only the second player in history to sweep the US Women’s Amateur Public Links and US Women’s Amateur in 2009, seized control with two more birdies on Nos. 18 and 1 but reeled back with a bogey on the tough No. 5 before closing out with birdies on nos. 6 and 9 to gain a shared view of the top.

American Ally McDonald also turned in a bogey-free card of 66 to trail the joint leaders by one while former world No. 1 and two-time Major winner Ariya Jutanugarn of Thailand missed forcing a tie at third with a wet bogey on the closing par-5 18th, settling for a 67 with Lindsey Weaver, also of the US.

Pagdanganan, who honed her short game, including putting, during the break, outshot last week’s Symetra Tour leg runaway winner Matilda Castren of Finland, who carded a 69, with the former hoping to duplicate her blistering frontside stint in Friday’s second round where they will switch nines starting at 9:06 a.m.