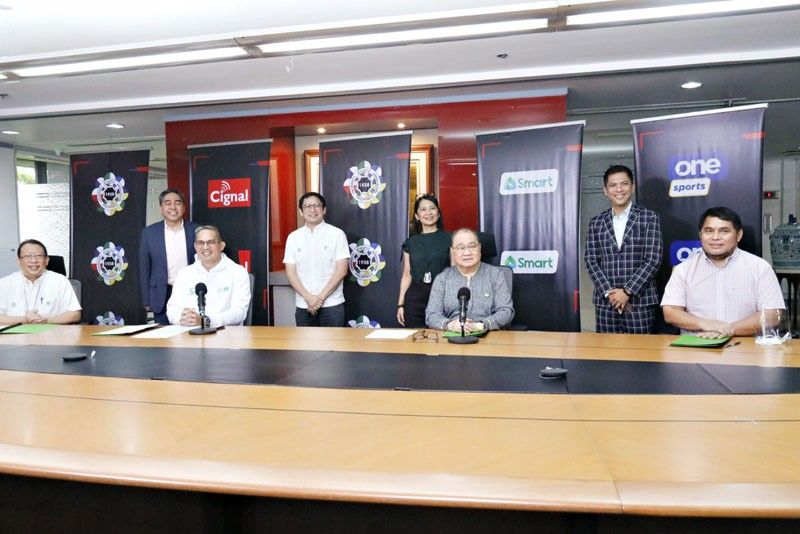 UAAP to be closer to fans on multiple platforms

MANILA, Philippines — The UAAP may have cancelled its 83rd Season due to the pandemic but it is bound for greater heights for the next five years after officially inking a partnership yesterday with new broadcast home Cignal TV and Smart Communications led by PLDT chairman and CEO Manny V. Pangilinan.

“The game has changed and so did the way we consume sports. We will take the UAAP to greater heights,” said Saguisag in their official contract signing at the PLDT Building in Makati.

“We will bring with us our passion and advocacy for sports. With Cignal and Smart, we will bring the UAAP closer to the fans using our multiple platforms,” said Cignal TV and TV5 president Robert Galang.

From the airwaves on TV and radio to the web on mobile phone and computer, UAAP’s fresh start includes a wide array of platforms to reach its fans and offer its games through unmatched capabilities of Cignal TV and Smart as its exclusive TV and digital partner.

Starting next year when the UAAP eyes to resume season, Cignal TV will air top events like the opening, cheerdance competition, men’s basketball and women’s volleyball live on its free-to-air channel One Sports.

Radyo Singko will also air live games of men’s basketball while all other sports and events will have full coverage on its Cignal cable channels and other platforms.

Led by CEO and president Al Panlilio, Smart is also set to launch an exclusive digital platform and application for the UAAP that will be accessible 24/7 for all the fans. Wireless connections will also be installed in all UAAP member schools.

After introducing the first 5G-powered sports broadcast in the PBA Bubble, Smart will also continue its rollout to the UAAP as part of the massive partnership built on “raising the level of broadcast coverage and experience.”

“Our intention is to raise the level of not only the broadcast coverage but also the experience itself of the players, the fans. We want to highlight beyond the broadcast imperatives and raise the profile of players and the schools. We really look forward to the next season sooner than later,” said Pangilinan.

Jackie Lou Blanco wins throwback Thursday with an old photo from when she was "carefree at 14." On Instagram, the incredibly...
Read more
Sports