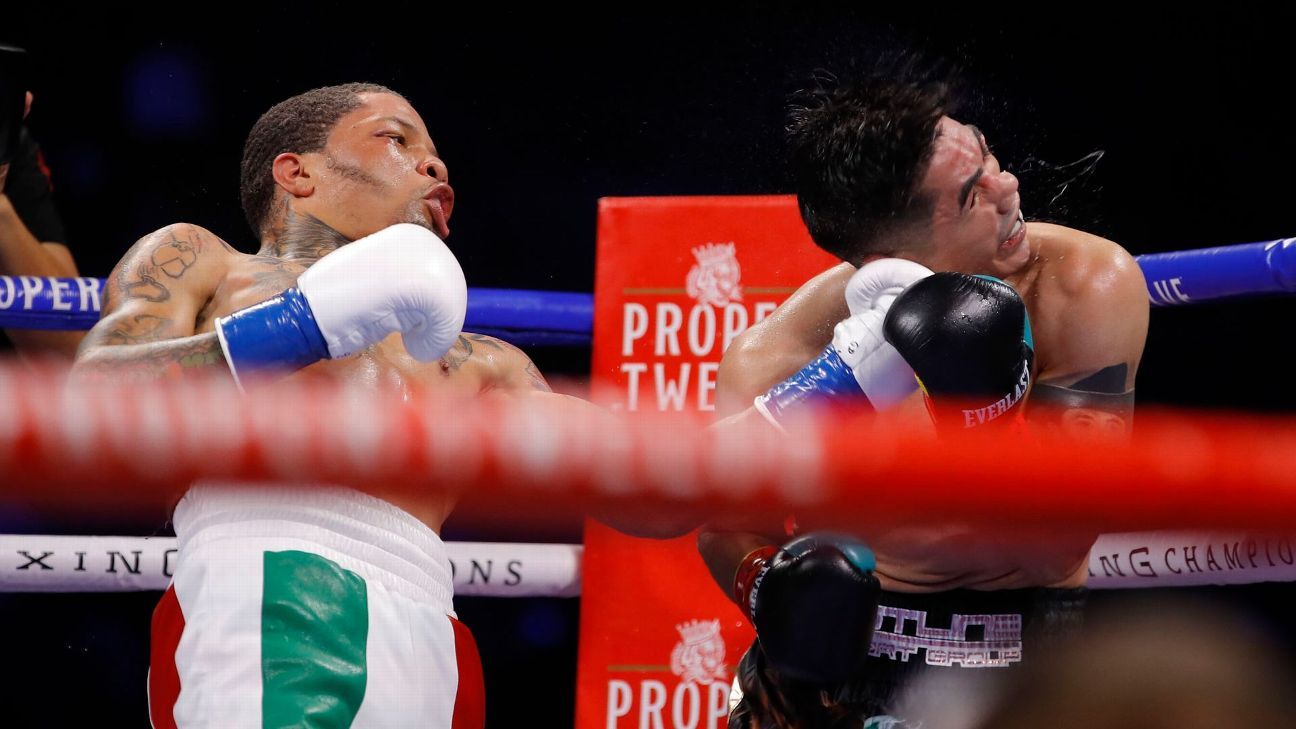 A wildly entertaining month of boxing rose to a fittingly exciting conclusion Saturday night, with a pair of world title fight main events that each ended with a highlight-reel knockout.

Gervonta Davis and Leo Santa Cruz seemed to be on even footing in their battle for titles at both 130 and 135 pounds in San Antonio, Texas, until a single uppercut from Davis knocked Santa Cruz out in a flash. Naoya Inoue was in control for the first six rounds of his double bantamweight world title defense against Jason Moloney in Las Vegas, and then he finished it with a flourish with a seventh-round knockout.

The undercards of both fight nights also had world title fights, as well as former title contenders putting on strong performances throughout. This all followed a heavyweight main event earlier in the day in London, as Oleksandr Usyk won a definitive decision in a demanding clash against Dereck Chisora.

Our boxing team sifts through the fallout of a full Halloween slate of fights.

What’s next for Gervonta Davis after his highlight-reel KO?

Cameron Wolfe: Next up is to enjoy the elevator ride up to boxing stardom — and maybe more — because that KO against a somehow underrated four-division champion earned him a new group of fans. Davis will need to keep taking challenges to keep them, though.

Floyd Mayweather, Davis’ promoter, says he plans for Davis to fight two or three times in 2021, and at least one of those fights should be against another of the young lions quartet at lightweight (Teofimo Lopez Jr., Ryan Garcia, Devin Haney). Lopez would obviously be the biggest and best of these bouts and certainly my first pic, but given that Lopez will likely be busy chasing the winner of the much-anticipated Jose Ramirez-Josh Taylor junior welterweight unification bout in 2021, let’s see a bout with Garcia in 2021, with Lopez in 2022 at either 135 or 140.

Garcia and Davis have traded insults via social media for months, and assuming that Garcia beats Luke Campbell in December, it’s a fight that will sell. Davis’ power is the most effective brand-building tool that any young boxer has, and he can call his shot on what he wants because people will tune in regardless.

Where does Santa Cruz go from here?

Wolfe: I hope he takes a little time off because that was a brutal knockout. But he proved that he’s a warrior, and he shouldn’t feel ashamed that he got caught.

Santa Cruz’s pursuit of a title in five weight classes fell short, and now he has no title at 130 pounds either, so his next pursuit should be a title shot at featherweight or junior lightweight.

I’d love to see a bout between Santa Cruz and Vasiliy Lomachenko after both rebound from their tough losses. Another fun immediate bout could be against Shakur Stevenson.

We saw Inoue fight for the first time in a year. How did he do? And what’s next?

Steve Kim: Saturday night’s performance was a solid outing against a legitimate contender in Moloney. Given that his last bout with Nonito Donaire was a rather harrowing experience and given the injuries Inoue suffered, along with the protracted layoff, things could not have not gone better for the Japanese star.

Not only did he perform well, but Inoue also got in some quality rounds in which he was able to get more and more comfortable inside that ring. Given that this would most likely be his only appearance of 2020, this is much more beneficial for Inoue than an early round blowout would’ve been.

Looking ahead, the fight to make for next year is the one that was supposed to take place on April 25. Inoue versus John Riel Casimero, the defending WBO 118-pound champion, is a fight that is probably more anticipated than ever. Both are legitimate punchers, and Casimero and his handlers have made no secret of their desire to take on “The Monster.”

Is Usyk ready for Fury, Wilder or Joshua? Whom should he face next?

Nick Parkinson: No, not yet. Usyk said after his unanimous decision win over Dereck Chisora that he wants to go home to Ukraine and work on his game, which he rated as a 3/10 performance. That seemed overly self-critical, as Usyk’s boxing skills and movement made him a worthy winner in his second bout at heavyweight after he ruled as undisputed world cruiserweight champion.

Beating an opponent 38 pounds heavier also proved that Usyk can beat bigger opponents, but he will have to show more than what he did against Chisora if he is to beat the likes of WBC champion Tyson Fury, WBA-IBF-WBO king Anthony Joshua or former WBC titleholder Deontay Wilder. Fury, especially, with his height, reach and boxing skills, is a puzzle Usyk must work on. Joshua’s explosive power would have given Usyk problems based on his effort Saturday.

Facing former champions Andy Ruiz Jr. and Joseph Parker in 2021 would allow Usyk more time to acclimate to heavyweight and work on how he is going to beat bigger men — and perhaps bulk up a bit. Facing a tall opponent such as Robert Helenius would also be good preparation for Fury and Wilder.

How impressive was Regis Prograis in his return?

Wolfe: It was electric. Fighting on the Davis-Santa Cruz undercard, he looked sharp, powerful and ready to prove that he’s still a top title contender in the junior welterweight division.

It was disappointing to see Prograis miss weight by 1.5 pounds, which he blamed on the yearlong layoff. But his performance in the ring didn’t show an out-of-shape boxer. Don’t let the narrow loss to Josh Taylor fool you — Prograis is still a force.

It’s time to see that Maurice Hooker bout that was delayed or have him square off with Mario Barrios, who also scored a TKO Saturday in San Antonio. Eventually, Prograis will earn his way back into a title bout — probably sometime after the Jose Ramirez-Josh Taylor unification bout.