Pinoy Issues
More
Home Sports Sports News – Why Man United should get Ronaldo back and let... 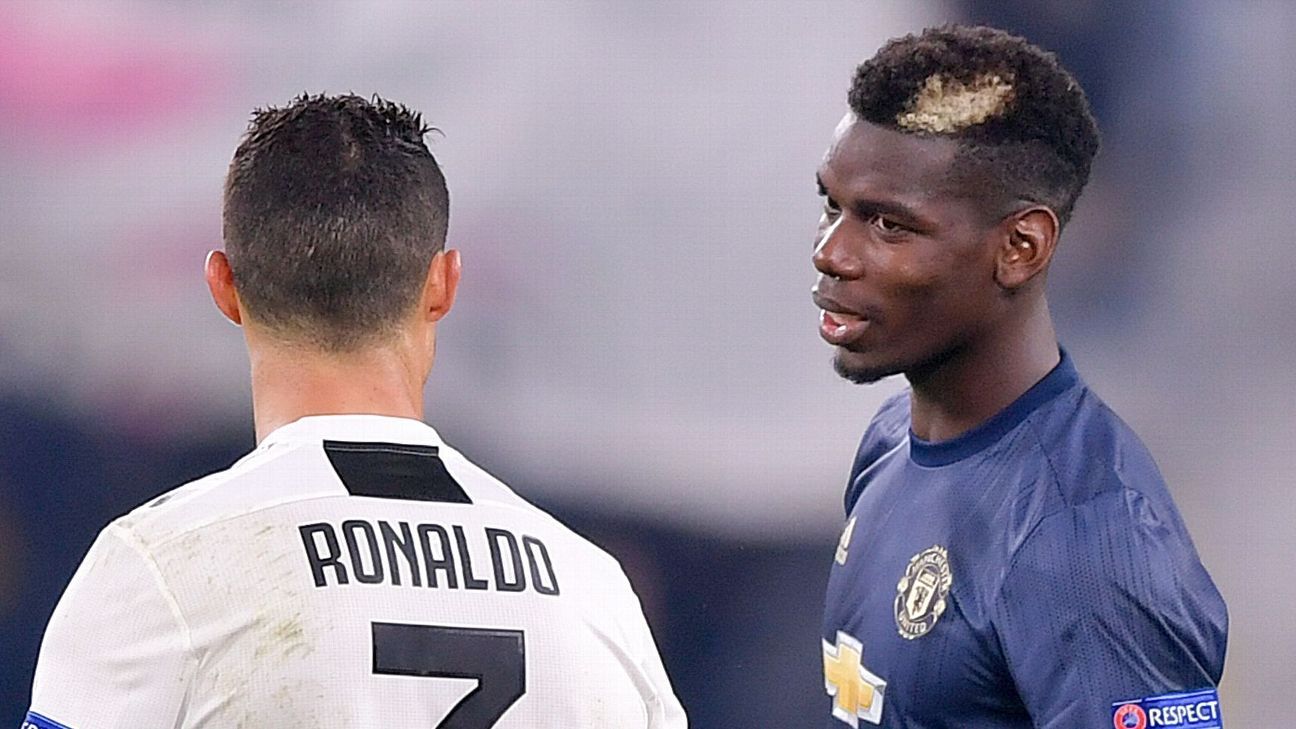 It’s the blockbuster deal that seems too crazy to happen, involving two of the biggest clubs in the world and their most high-profile stars, but it could be the only solution to the problems that Manchester United and Juventus are struggling to solve. In many ways, a player swap that would see Cristiano Ronaldo and Paul Pogba trade places is a transfer that would suit everyone.

In normal times, when the biggest clubs were flush with money and able to dictate where, why and when transfers happen, any kind of swap deal — never mind one involving two of the game’s most celebrated players — would never get off the ground. Player swaps have always been a rarity at the highest level, and when you consider the disastrous outcome of the Alexis Sanchez–Henrikh Mkhitaryan trade between United and Arsenal three years ago, it’s easy to see why.

But the impact on football of the COVID-19 pandemic has been huge, with clubs at every level of the game, in every country, seeing their finances hit hard due to fans being locked out, or crowd numbers hugely reduced, and television companies demanding rebates on their massive broadcasting deals, which has resulted in payments to clubs being slashed and prize money cut in the major competitions.

Even United and Juventus, two of Europe’s biggest clubs, have suffered. United reported a revenue drop of £70 million to the end of June in their last financial figures, and that number will only get bigger with Old Trafford continuing to host behind closed doors. Juventus, meanwhile, posted similar losses (€71.4m / £64.5m) for the year ending June 30, and the ongoing impact of the pandemic will bite even harder as this season progresses. So these are not good times for either club to be dealing with growing problems with their two top names — Ronaldo and Pogba.

Ronaldo, who will be 36 in February, is entering the final 18 months of his contract at Juventus, which is reportedly worth €31m (£28m) a year. Despite his return of 79 goals in 101 appearances for the Italian champions, Juve have yet to start talks over a new deal with the Portugal captain, and sources have told ESPN that the club would be open to offers for the forward, especially given the financial strain of COVID-19.

As for United, their Pogba headache just won’t go away. Like Ronaldo, his £15m-a-year contract expires in June 2022, and his agent Mino Raiola hardly shocked the world last week by saying that his client wanted to leave Old Trafford to kick-start his career. But there is no line of potential buyers for the 27-year-old right now, and he, Raiola and United know that. They know that the usual candidates — Real Madrid, Paris Saint-Germain and Juve — don’t have the money to sign him or pay his wages.

It is a similar story with Juve and Ronaldo, although the former United and Real forward is at least delivering on the pitch for his team, which is difficult to say for Pogba. Juve know that there is no club on the planet who would pay a fee for Ronaldo and then agree to meet his wage demands — even if he dropped them by a third.

This is why a Ronaldo-Pogba swap deal could prove so compelling to the two clubs and both players. It offers a route out of a difficult situation for all parties. But what are the potential obstacles and could it really happen?

Would it work from a football perspective? Do the coaches even want it to happen?

First of all, this deal will not work if there was no sporting sense for it to happen. Would Pogba work for Juve and would United take Ronaldo back, having sold him to Real for a then-world record £80m in 2009?

Juventus coach Andrea Pirlo played alongside Pogba during their time together in Turin and they formed a midfield that saw the Italians reach the 2015 Champions League final. Pirlo knows what Pogba can offer, how his vision, passing range, goal-scoring ability and athleticism would improve his Juve team and how he would give the club a midfielder in the prime years of his career. If signing Pogba meant losing Ronaldo, it would be a tough call, but Juve have to start to plan for life without their superstar and this deal would make sense.

For United, trading a 27-year-old for a player about to turn 36 would initially seem like madness, but Pogba is not performing for Ole Gunnar Solskjaer’s team, and the club are getting little or no return on their investment and salary outlay. They would lose a midfielder and replace him with a forward, but Ronaldo remains a potent threat in front of goal and no team could realistically reject the chance to sign a player who, even at this stage of his career, has scored 14 goals in 12 games so far this season.

From a football perspective, United and Juventus would benefit from a swap.

This might be a “swap,” but it would still be a huge financial commitment for both clubs, right?

Juventus would be getting the chance to sign a player who would cost half of Ronaldo’s annual salary — that’s an obvious plus for the Italians. And at 27, Pogba would also give Juventus the ability to realise a return on the player by selling him for a fee in the future.

From a business perspective, it’s difficult to see a downside for Juventus, although their commercial power would likely take a hit if they could no longer offer Ronaldo’s image and branding to potential sponsors. That said, Pogba is also a huge figure in terms of commercial visibility across the globe. The commercial boost would be the sweetener for United, because Ronaldo would cost much more than Pogba on a weekly basis, even if he took a cut on his Juventus salary. United have capitalised on Pogba’s global appeal and his loss would be a blow in most circumstances, but not if he was replaced by Ronaldo, who is on a different level entirely.

There’s no question, though, that swapping Pogba for Ronaldo would see United footing most of the bill because they would have to find more for wages. But the payback on the pitch, and off it, would likely exceed what Pogba has brought to United; it would make the numbers stack up for the Old Trafford side. And if Manchester City manage to pull off a deal for Lionel Messi next summer, United will need to respond with their own box office star. Ronaldo and Messi, playing the final chapters of their careers in Manchester, would be impossible to resist.

Pogba enjoyed his time in Turin, so a return would be an easy sell, but didn’t Ronaldo find it tough in Manchester?

If you speak to Ronaldo’s former United teammates, they all have fond memories of his time at Old Trafford between 2003 and 2009, but they always say one thing: he hated the weather. As a young player from the sun-drenched island of Madeira, Manchester was a culture shock for Ronaldo. It was too cold and too wet, and way too often, for his liking, and he also didn’t enjoy darkness setting in around 4 p.m. during the winter months. But despite his dislike of the climate, Ronaldo stuck around for six years in Manchester and he’s made no secret of his affection for the club and the city.

His subsequent time in Madrid and Turin will have taught him that most European cities are cold in the winter, so a return to Manchester would not be akin to signing up for two years in the Arctic Circle. But if there is a barrier to any potential return to Old Trafford, the climate will not be in United’s favour.

But don’t United want to move away from signing older players?

Yes, there has been a concerted effort to reduce the age of the squad at Old Trafford and the expensive mistake of signing then-29-year-old Sanchez in January 2018 was a turning point in United’s recruitment strategy. But there is also a case that each player and signing should be judged on its merits, which is why United signed the 33-year-old free agent Edinson Cavani in October. Zlatan Ibrahimovic was 34 when he arrived on a free transfer from Paris Saint-Germain in 2016. He hit 28 goals in 46 games in his first season and, but for a serious knee injury, is likely to have stayed at the club for longer.

So age is not a permanent barrier to player deals at United — the deal simply has to make sense, both on the pitch and off it. Ronaldo’s stats continue to outshine players of all ages and there is no reason to believe that he doesn’t have at least two more years at the top level.

OK, so if Juventus want Pogba back, why not offer somebody else in part-exchange? Dybala, maybe?

The financial issue of having both Ronaldo and Pogba on the payroll would leave Juventus needing to do some serious cost-cutting elsewhere and the numbers wouldn’t make sense unless they sold three to four of their biggest names.

United wanted Paulo Dybala at the start of last season, but the Argentina international made it clear he had no interest in moving to Old Trafford, so you can rule that one out. Former Arsenal midfielder Aaron Ramsey could be used to tempt United to sell Pogba, but the Welshman’s injury record would set alarm bells ringing at Old Trafford, and United would also be getting a downgrade on the World Cup-winning, but inconsistent, France international. Matthijs de Ligt is a player of interest to United, but the Dutch defender is represented by Raiola — that may be an instant deal-breaker for the Old Trafford hierarchy.

But it is fairly straightforward — the only deal that works for both sides is Ronaldo for Pogba, and vice-versa. Nothing else measures up.

So will it happen then?

The word from within United is that Ronaldo is no longer on their radar. They have tried and failed on numerous occasions since he left to get him back to Manchester, but the stars have never quite aligned.

As a straight purchase, it doesn’t make sense for United, but the Pogba element is what makes Ronaldo a feasible option again. United don’t want to lose Pogba as a free agent in 2022, but they know that the transfer market is in the midst of a financial crisis, which leaves them with nobody to sell to next summer. And Juventus may need to cash in on Ronaldo within the next six months to get some return on their investment and avoid another season of big wages, with nothing but a free agent at the end of it.

From a football and business perspective, there are more pluses than minuses for both clubs when it comes to a Pogba-Ronaldo swap, and the case can be made for both players to do the deal. But will it happen? Watch this space.