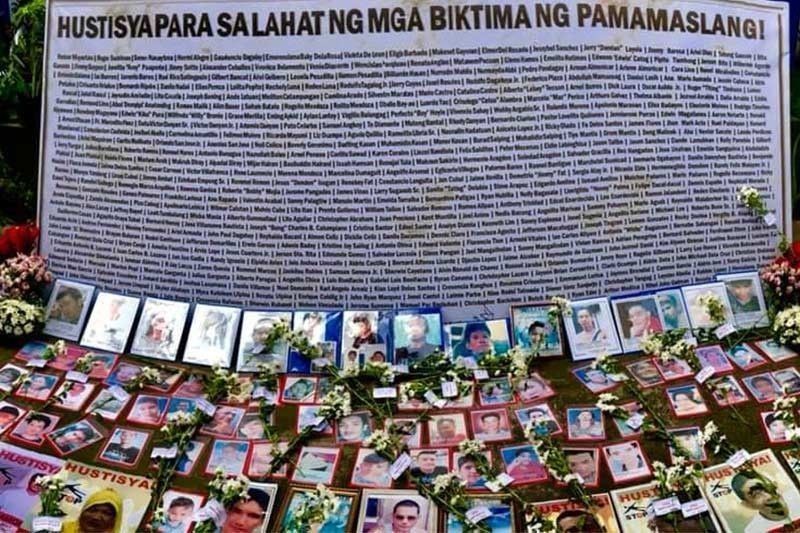 MANILA, Philippines (Updated 7:15 p.m.) — The Commission on Human Rights said it was not able to take part in the initial report of the Philippine government’s panel that reviewed police’ “drug war” operations that resulted in deaths.

Justice Secretary Menardo Guevarra said Monday that the DOJ-led inter-agency panel’s initial report dated Dec. 29, 2020 has just been submitted to the Office of the President. “Let’s give him time to pore over it,” he added.

Commissioner Karen Gomez-Dumpit, in a statement, noted that the government’s release of a partial report on the “drug war” review is “a step towards ensuring accountability and addressing impunity.”

“However, we regret that the Commission on Human Rights was not involved in the review, contrary to the commitments and assurances made by the government during the 44th Session of the Human Rights Council,” the human rights commissioner said, adding that this is “an unfulfilled promise to Filipinos and the entire community of nations.”

Guevarra in July 2020 told the UNHRC that his department will chair the inter-agency panel that will conduct “a judicious review of the 5,655 anti-illegal drug operations where deaths occurred.” Human rights groups have estimated drug war deaths at four times the number acknowledged by the government.

The Philippine government has since missed its initial November 2020 timeline for releasing the report, citing the pandemic and lockdowns hampering their work.

Guevarra however said they still intend to engage with the CHR in the government review. “As I said, the initial report is only a partial one. Our efforts have been severely hampered by current restrictions on mobility and physical access to records. Much collaborative work remains to be done,” the DOJ chief added.

The panel’s initial report will cover initial findings in a couple of provinces with the highest incidence of police operations resulting in deaths, particularly in Bulacan and Pampanga.

A full report will also be released, but DOJ has yet to determine a timeline for this.

CHR reached out to DOJ repeatedly

Gomez-Dumpit stressed that they have repeatedly asked the DOJ for its role in the panel. “Despite persistent challenges, the Commission has never closed its doors to opportunities for cooperation with government,” she said.

As early as October — or about a month before the DOJ’s earlier timeline for the report — the CHR wrote to the department at least thrice asking about the role the commission will play in its review, Gomez-Dumpit said.

The CHR did not receive any response.

RELATED: CHR says no data shared yet under pact with DOJ on rights violations probes

The rights commissioner meanwhile urged the government to publicize its findings, stressing that transparency is key in lending credibility to the government’s report.

She added: “This will allow victims and their families to access crucial information in the process of obtaining justice. We reiterated our openness and wiliness to engage with the government in this process.”

“It is our view that the best way in improving human rights situation in the country is through inclusive and constructive engagement between the government, independent monitoring mechanisms and civil society,” Gomez-Dumpit also said.

Significance of the panel report

The “drug war” review panel figured significantly in the UNHRC’s resolution released in October that pushed for capacity building to improve the human rights situation in the Philippines, but stopped short of launching an independent, on-the-ground investigation that rights groups have been calling for.

The EcuVoice delegation to the rights body has raised doubts on the review panel saying it may just be “a tricky assuagement to appease the cries for justice of the victims,” as they asserted that “domestic remedies in the Philippines are by and large ineffective, protracted, ponderous, skewed and even frustrating to the victims.”

Rights groups have also flagged the “drug war” panel review as an attempt at damage control to avoid international scrutiny and investigation.

Last December, International Criminal Court Prosecutor Fatou Bensouda said her office  is “satisfied that information available provides a reasonable basis to believe” that murder, torture and the infliction of serious physical injury and mental harm were committed in the Philippines between July 1, 2016 and March 16, 2019 in connection with the anti-narcotics crackdown.

She added that a decision on whether to hold a formal investigation into alleged extrajudicial killings and other abuses in the Philippines would be out in the first half of 2021. — with report from Gaea Katreena Cabico

Foreign Affairs Secretary Alan Peter Cayetano wraps up his address before the Geneva-based international arm of the United Nations, urging the body not to “politicize, weaponize human rights.”

Speaking before the Human Rights Council, Cayetano fiercely defended President Rodrigo Duterte’s brutal and deadly drug war. He said it was launched “to save lives, to preserve families, to protect communities and [to] stop the country from sliding into a narco state.”

The illegal drug campaign, however, is marked by apparent police abuses in shooting down drug suspects ahead of formal charges and several cases of mistaken identity killings. Thousands have died in police operations.

Human rights organizations in the Philippines and abroad have also decried extrajudicial executions related to the campaign.

The Philippine National Police says it welcomes a UN Human Rights Council resolution calling for technical assistance to the Philippines on accountability for human rights violations.

Rights groups and the families of victims of alleged abuse by state agents have called the resolution a let down for not launching a probe into the rights situation in the Philippines.

“We acknowledge this manifestation of the UNHRC’s recognition of the Philippine government’s initiatives to review and reevaluate all allegations of human rights violations in the implementation of the national anti-illegal drugs campaign,” the PNP says in a statement to the media.

“The proposed ‘technical cooperation and capacity-building for the promotion and protection of human rights in the Philippines’ offers more opportunities for the PNP to further promote our own advocacy to protect, respect and fulfill human rights in all aspects of police operation,” the national police also says.

The United Nations Human Rights Council adopts a resolution on technical cooperation and capacity-building on human rights in the Philippines.

The body also requests UN High Commissioner for Human Rights Michelle Bachelet to support continued fulfillment of international obligations, including alleged police violations in the conduct of the Philippines’ campaign against illegal drugs.

The Commission on Human Rights says they welcome the statement of the UN High Commissioner for Human Rights calling for “an independent and transparent probe into the killings, violence, and threats against human rights workers and advocates.”

“CHR hopes that the government heeds expediently to this repeated call with concrete steps that would ascertain accountability and justice while also implementing definitive actions to prevent any further attacks and loss of life,” it says in a statement.

Opposition Sen. Leila de Lima says the DOJ-led panel that allegedly reviews the police killings in President Rodrigo Duterte’s drug war is “too late, too little and too weak.”

“Unless and until we see any actual, significant and concrete achievements, in terms of case build-up and prosecution of EJK offenders, the sincerity of this initiative will remain dubious at best. For the moment, this representation will just call it as it is: a desperate, last-minute attempt at evading accountability,” De Lima says.

Watchdog Human Rights Watch says the Philippines’ inter-agency panel created to investigate killings under its brutal drug war is “nothing more than a ruse to shield the country from international scrutiny.”

“The International Criminal Court could open an investigation into crimes against humanity committed up to March 17, 2019, the date when the Philippines’ withdrawal from the court took effect,” Phil Robertson, HRW deputy Asia director, says.