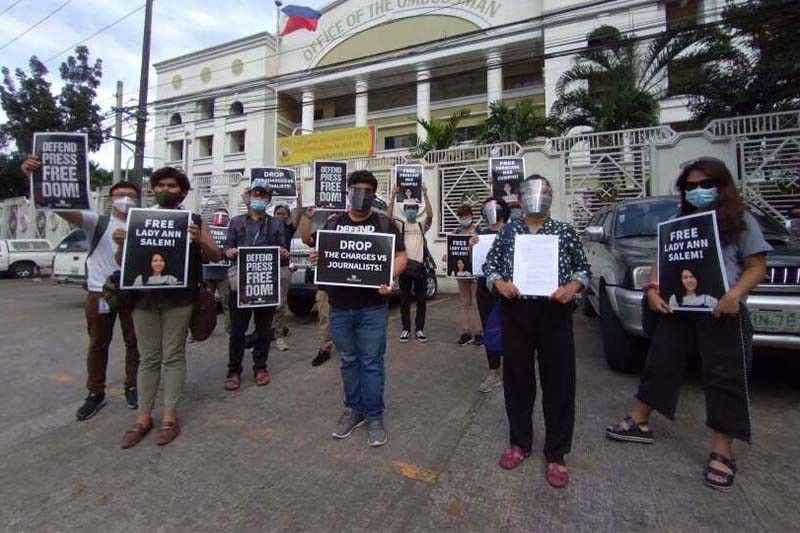 MANILA, Philippines — Alternative media network AlterMidya and three members of its network have asked the Office of the Ombudsman to dismiss three officials of the government’s anti-communist task force over their baseless red-tagging, a practice that puts those labelled as rebels and terrorists in danger..

Named as respondents are NTF-ELCAC spokespersons Lt. Gen. Antonio Parlade Jr. and Lorraine Badoy, and its Executive Director Allen Capuyan. Badoy is also an undersecretary at the Presidential Communications Operations Office while Capuyan is concurrently chair of the National Commission on Indigenous Peoples.

The four media outfits accused them of violation Republic Act 3019 — the Anti-Graft and Corrupt Practices Act — and RA 6713 — the Code of Conduct and Ethical Standards for Public Officials and Employees.

They asked the Ombudsman to place the three officials under preventive suspension during the investigation and ultimately dismiss them from service with forfeiture of benefits.

This is the latest legal action seeking accountability from the NTF-ELCAC over its officers’ red-tagging. Starting February this year, complaints against the task force have been filed before the Office of the Ombudsman—from IBON Foundation, Rep. Carlos Zarate (Bayan Muna party-list), rights alliance Karapatan, Rep. Sarah Elago (Kabataan party-list), NUPL lawyers themselves, with alternative media groups themselves being the latest to sue.

In this latest suit, the four media outfits noted that Parlade, on May 12, accused Altermidya, Bulatlat and Kodao of being “long-time cohorts” of, and of being created by the Communist Party of the Philippines. Badoy repeated Parlade’s accusations in a reworded Facebook post.

The red-tagging continued at the Senate. In a hearing on December 1, Capuyan showed a presentation alleged that AlterMidya and its member organizations are part of the CPP’s National Propaganda Bureau.

AlterMidya has rejected the allegations. Journalism professor and AlterMidya chairperson Luis Teodoro said in response to the testimony at the Senate that “the fundamental ethical and professional responsibility of truth-telling in journalism has always been AlterMidya’s guiding principle…concerned as it is with the need to develop the well-informed public vital to a democracy.”

“It is no one’s ‘front’ and owes its allegiance only to these principles,” he also said.

“The actions of Respondents have directly and indirectly emboldened other state agencies and personnel to baselessly and maliciously label members of alternative media organizations as ‘propagandists’ of alleged ‘communist terrorists,’” they added.

The alternative media groups also noted that the pronouncement of the respondent NTF-ELCAC officers were posted on several social media platforms and some have appeared in state-run media outlets like the Philippine News Agency.

“There is no doubt that Respondents’ unlawful statements were official acts of the government under the rubric of its ‘whole-of-nation approach’ to counterinsurgency,” they said.

“For publishing critical views and perspectives on current affairs and engaging in pro-peoples journalism, Complainants have been unfairly vilified, even as they are clearly legal organizations of media practitioners—unarmed civilians—whose espousal of press freedom is essential to Philippine democracy,” they said.

The media outfits stressed that they have not been involved in terrorism nor in instigating others to take up arms.

“Thus, the statements issued by the Respondents, not being founded on any facts and unsupported by such evidence, should even be considered defamatory, as these remarks impute the commission of the crimes of rebellion and terrorism onto the complainants, when this could not be farther from the truth,” they added.

The media groups also stressed that the NTF-ELCAC’s statements placed their members in grave danger, as red-baiting is “essentially an incitement to his or her deprivation of liberty on trumped-up criminal cases, if not physical harm or even death.”

The complainants cited the arrest of Lady Ann Salem, editor of alternative news outfit Manila Today, last Dcember 10. She is accused of illegal possession of explosives and firearms, a charge she denied.

“Undue injury was also caused to the public. Red-tagging Complainants brought a chilling effect on the press, as well as on discourse and debate, stifling the free expression of dissent. Respondents, thus, served as witting instruments of tyranny and repression,” the complaint read.

“Complainants have been targeted for their critical and independent reporting on issues affecting the marginalized and oppressed sectors. They are being persecuted for publishing progressive and alternative views on matters affecting the Filipino people—progressive ideas that are anathema to the current tyrannical regime,” they told the Ombudsman.

They added: “The actions of Respondents are aimed to intentionally and severely deprive Complainants of the right to practice independent and advocacy journalism, as well as their right to free expression and speech, especially in relation to issues that the Respondents deem critical of the administration they are blindly and obsequiously serving.”