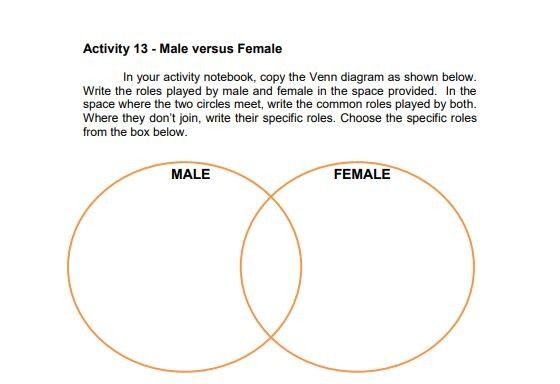 ‘Archaic’: DepEd official says materials with gender stereotypes should not be taught to students

MANILA, Philippines — An education official has admitted that learning materials containing gender stereotypes have to be corrected, saying such a view should have long been discarded from being taught in schools.

Social media users had pointed out several printed modules with one asking learners to classify “roles” for men and women, such as washing dishes, cleaning the house and taking ballet lessons, to name a few. The said material, supposedly for Grade 8 students, is available for viewing on DepEd Central Visayas’ website, particularly on the schools division of Negros Oriental.

Undersecretary for Curriculum and Instruction Diosdado San Antonio at a television interview recognized that the agency should modify the errors, along with others that have been raised before.

(That’s part of what has to be corrected because it is wrong. Gender stereotypes are already a thing of the past.)

The education official added that the agency is seeking to strengthen discussions on gender and development issues in schools and even in their offices.

(If that material has been released, we have to tell our learners that those are no longer applicable in what they are supposed to study. Those are contents that should no longer be there.)

DepEd has put to use printed modules along with television and radio broadcasts for its blended learning this school year that was pushed through due to the coronavirus pandemic.

National alliance of women Gabriela had criticized the release of such modules, saying it contains “a breadth of sexist and misogynistic lessons too.”

“In many of DepEd’s modules, they describe men to be ‘strong, logical, brave,’ and in the same breath call women ‘weak, dependent, fragile.” Are these the values we want to teach our children? That women are weak, feeble, and voiceless?” said Joan Salvador, Gabriela’s deputy secretary general.

The group called for the scrapping of the said themes in the agency’s resources, as they warned that it only enables the mentality that women have less value in society.

“When people are socialized to believe that women should be valued less and that other genders are completely non-existent, the result is a culture of violence against marginalized genders, particularly women,” Salvador added.

DepEd has previously welcomed reports of mistakes in its learning modules, admitting that errors are part of the adjustments they too had to make due changes from the ongoing health crisis.

It has come up with its “error watch” initiative that seeks to collect reports, but the agency has yet to release figures on the number of instances they have received so far, nearly a month since classes for more than 24 million begun.