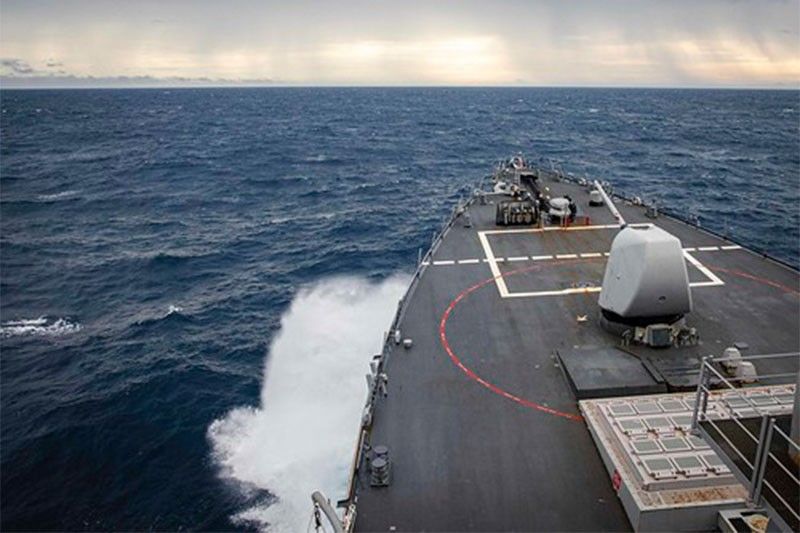 MANILA, Philippines — Chinese military warned off a US destroyer after sailing in the waters off Spratly Islands in the South China Sea, which the Philippines also claims.

The Chinese People’s Liberation Army (PLA) accused USS John S. McCain of trespassing into its territorial waters, according to a report from China state-affiliated Global Times.

The Arleigh Burke-class guided-missile destroyer John S. McCain (DDG 56) launched its freedom of navigation operations in the Spratly Islands, which, the US said, is consistent with international law, on December 22.

A report from the US 7th Fleet said the operation challenges restrictions on innocent passage imposed by China, Vietnam and Taiwan.

These three countries require either permission or advance notification before a foreign military vessel conducts “innocent passage” in their territorial sea.

“All interactions with foreign military forces were consistent with international norms and did not impact the operation,” the US 7th Fleet said.

The Philippines, Brunei and Malaysia also claim sovereignty over some features in the Spratly Islands.

Manila claims the northeastern section of the Spratly Islands, which is also called the Kalayaan Island Group, in addition to Panatag or Scarborough Shoal, according to the National Bureau of Asian Research.

The US Navy stressed that “unlawful and sweeping” maritime claims in the South China Sea, part of which is the West Philippine Sea, pose a “serious threat to the freedom of the seas.”

“The United States challenges excessive maritime claims around the world regardless of the identity of the claimant. The international law of the sea as reflected in the 1982 Law of the Sea Convention provides for certain rights and freedoms and other lawful uses of the sea to all nations,” the US 7th Fleet said.

Beijing continues to reject the July 2016 decision of a United Nations-backed arbitral tribunal that ruled in favor of the Philippines, invalidating China’s excessive claims over the South China Sea.

In July, US Secretary Mike Pompeo declared that Washington will consider Beijing’s pursuit of resources in the South China Sea as illegal.

“We are making clear: Beijing’s claims to offshore resources across most of the South China Sea are completely unlawful, as is its campaign of bullying to control them,” Pompeo earlier said. —  Patricia Lourdes Viray