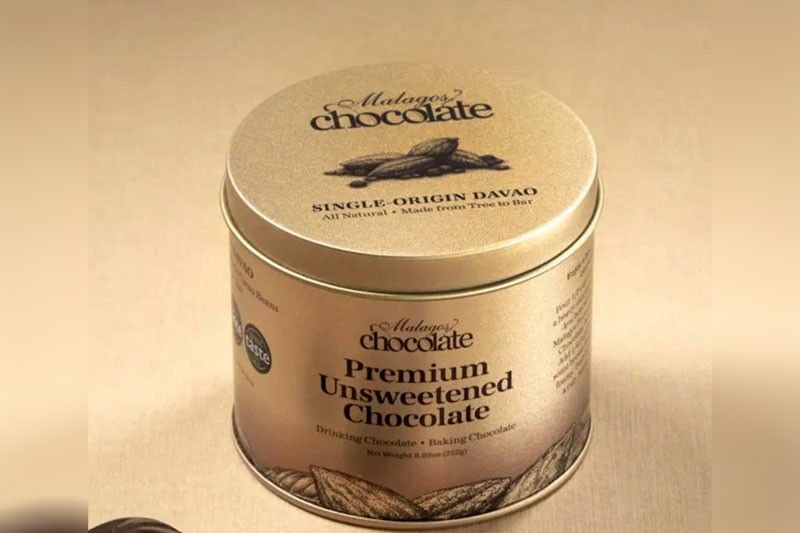 MANILA, Philippines — The famous Malagos Chocolates of Davao continues to prove its dominance after it bagged top awards in the first-ever online international chocolate festival.

The three other golds were given in the special categories of Growing Country, Chocolate Maker and Direct Traded. It also won bronze in the Plain/Origin Dark Drinking Chocolate (made with milk) category.

Its well-known Malagos 100% Premium Unsweetened Chocolate, the award-winning entry, is its base throughout its entire product line.

It is Malagos’ purest as it contains only one ingredient, the fermented dried cacao bean.

Chocolate maker and Malagos Chocolate managing director Rex Puentespina said the recent feat is a validation of the company’s never-ending quest for excellence in the field of cacao farming and chocolate-making.

“We share and dedicate these international recognitions to the hardworking Filipino farmers. Truly grateful as well to those who continue to support and cheer us on during these tough times,” he said.

The recent Drinking Chocolate Virtual Ceremony was organized by the International Chocolate Awards in partnership with the Schokoladen Gourmet Festival, the world’s first online chocolate festival, which is run by Germany-based Chocolats-de-luxe.de.

The World Drinking Chocolate Competition celebrates the origins of chocolate as a drink and comes with a revival of high-quality drinking chocolate within the craft chocolate movement.

With the new awards, Malagos has gone full circle. Back in 2015, it was in this same category that it was able to claim its first international award, which placed the spotlight on Malagos and Philippine cacao.

It was in 1963 when its founders, Roberto and Charita Puentespina, bought their first farm in Tagakpan in Davao City located at the foothills of Mt. Talomo. But it was only in 2003 when they ventured into cacao farming.

Until 2012, the Puentespinas improved on cacao growing and post-harvest practices, built their factory and further refined their chocolate processes.

Since then, Philippine cacao started to gain traction again and was made a priority crop.

Just last month, the Department of Agriculture officially declared Davao City as the Cacao Capital of the Philippines as the government moves to boost production of the high value commodity.

Davao City continues to be the top producer of cacao beans with close to 2,300 metric tons of output last year or about 38 percent of Davao region’s production.

Davao has been consistently producing high-quality beans, contributing an average of 80 percent to the total volume produced throughout the country.

Cacao beans from Davao have been recognized as one of the world’s best and is now one of the most sought-after beans by chocolate makers from the US, Japan and Europe.