Ohio State will be without leading wide receiver Chris Olave, starting linebacker Baron Browning and others for Saturday's Big Ten championship against No....
More 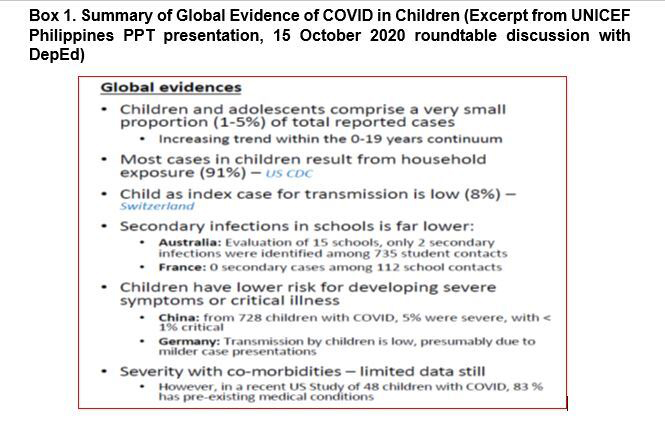 DepEd: Schools are least sources of COVID-19 infection according to UNICEF

MANILA, Philippines — Education Secretary Leonor Briones on Wednesday asserted that schools are the least places where children could be infected with the coronavirus. But on what studies is her claim anchored in?

The move came as government conceded that the distance learning setup put in place as an alternative to continue school amid the pandemic has been marred by various problems, putting at risk the quality of students’ learning.

(The least source of infection are schools because it is guarded and 90% of students are at homes. So the role of parents is crucial because children would go home and by then we would no longer have a control of the situation in their houses.)

DepEd’s recommendation presented to the Cabinet, a copy of which was made available to reporters by afternoon, showed that the claim was based on studies compiled by UNICEF in the Philippines.

The agency said it met with UNICEF, along with World Health Organization representatives in the country, as well as the Asian Development Bank in October to discuss proposals for resuming face-to-face classes.

“UNICEF’s presentation included a slide summarizing some of the global evidence on COVID-19 infection among children,” DepEd said.

“These include: children and adolescents comprise a small proportion of total reported cases; most cases in children result from household exposure; and children as index case for transmission is low.”

The summary of data gathered said majority of cases among children had come from exposure from their homes at 91%, according to the US Center for Disease Control.

Actual copies of the studies, however, were not released, and the time frame on when these were conducted was not immediately clear.

This screencap from DepEd’s recommendation to the Cabinet shows UNICEF’s summary of global findings.

DepEd said the lower incidence of COVID-19 cases compared with older age groups is seen on figures from the health department. But it also recognized that while such is the case, WHO Philippines reported that asymptomatic positive cases are likely higher among children.

Briones, in a television interview, said over a thousand schools are being eyed as possible sites for the test run which will begin by January 11.

This will see smaller class sizes of around 15 to 20 students, and will follow staggered schedules.

DepEd has also stressed that health protocols should be in place at home and during travel for those who would participate in the pilot study, apart from the standards that will be put in schools.

“Because of the relatively higher incidence of asymptomatic infection among children, it is very important that parents do not send children to school when there is a known infection or exposure in the household, or anyone exhibiting flu-like symptoms,” the agency said in its proposal.

It also revealed that according to its own survey among students, 8 million walk to their schools, 4.6 million commute, 2.1 million using family vehicles while only over 654,000 have school services.

“The higher risks of exposure are for those using public transportation and those using school service,” DepEd said. “Such travel must observe social distancing, wearing of masks and face shield, and respiratory etiquette inside the vehicles and in pick-up and drop-off points.

Schools are tasked to disinfect on a regular basis. Aside from monitoring symptoms, school clinics would also be put up or upgraded for better health services to students, teachers and staff.

“We submit that there should be shared responsibility among DepEd, the parents, and the LGUs on the resumption of face-to-face classes and its implications. Without acceptance that the responsibility is shared, DepEd will  likely be solely blamed for any incidence of infection/exposure,” the agency said.

This year saw 25 million Filipino students enrolling amid the COVID-19 pandemic, but a significant decrease of 2 million from the 27 million enrolled in 2019 was also observed.

Private school enrollment was down to 2.2 million from 4.3 million last year, as well as the number of those in alternative learning programs at more than 408,000 from over 739,000 in the previous year.

In DepEd’s own timeline, Briones has until December 28 to select schools that would be chosen as sites for the pilot run, which will be held until January 23.

The last week of the said month, meanwhile, will be reserved for finalizing recommendations to President Rodrigo Duterte if in-person learning would be allowed to return.

COVID 19 Updates – WATCH: ‘Save Ralph,’ the animated short that advocates against animal testing

Growing moles are not necessarily cancerous, Dr. Dave Ampil II said in a recent episode of Pinoy MD. "But it could...
Read more