The Uruguayan Academy of Letters on Friday denounced a three-game ban given to Manchester United's Edinson Cavani on Friday, calling the sanction for...
More 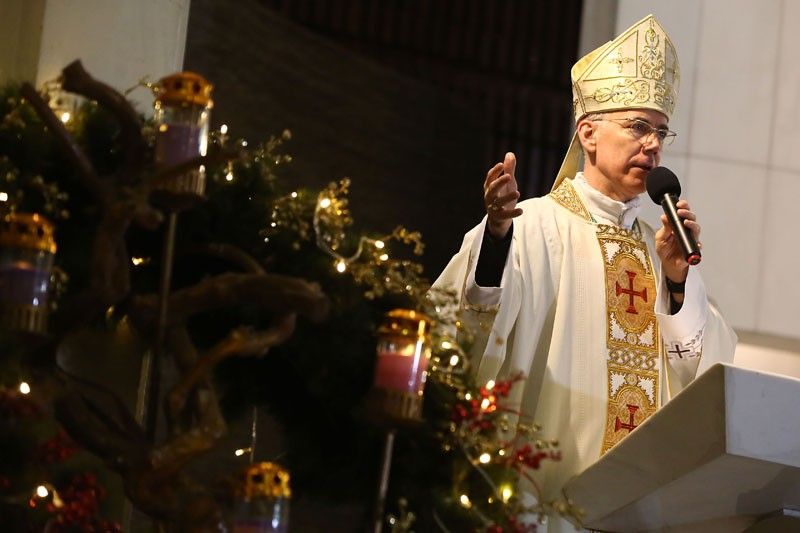 MANILA, Philippines — God is present even amid difficulties so there is no reason to be afraid, according to the apostolic nuncio in his message to the Filipino Catholic faithful.

Archbishop Charles John Brown was interviewed by Church-run Radyo Veritas before he led his first pre-dawn mass in Manila on Thursday.

Brown said that Jesus Christ hears the prayers of every Catholic faithful and he is always closer to them, especially in these trying times brought about by the coronavirus pandemic.

For the first time since arriving in the Philippines last month, Brown celebrated a pre-dawn mass or Simbang Gabi at the St. Anthony of Padua Parish in Malate, Manila where the Apostolic Nunciature is located.

In his homily, Brown said that the faithful should emulate the humbleness of Saint Joseph who cast no doubt in the healing power of Jesus Christ even when he was facing difficulties in his life.

Just like Saint Joseph, Brown said that the faithful will soon recover from the sufferings of this year, which include natural disasters and the COVID-19 pandemic.

“These things will pass, these difficulties, especially this COVID-19, will not last forever; the Lord is with you,” Brown said.

He was amazed by the strong faith of the Filipino faithful who flocked to the St. Anthony of Padua Parish to attend the Simbang Gabi despite the threat of COVID-19.

He also said that the people’s devotion to the Catholic Church only shows the “enculturation of the Catholic faith in the Philippines, a beautiful testament of the faith of the Filipino faithful.”

Pope Francis has appointed Cardinal Jose Advincula of Capiz as a new member of the Congregation for the Clergy in the Vatican, a few weeks after he was elevated as cardinal in November.

A Catholic Bishops’ Conference of the Philippines (CBCP) article stated that Advincula’s new assignment will make him part of the dicastery that is responsible for the formation, ministry and life of priests and deacons along with Cardinal Cornelius Sin of Brunei.

Advincula and Sin were among the 13 new cardinals elevated by Pope Francis last month.

The CBCP said that Advincula and Sin will work with Italian Cardinal Benjamin Stella who has been heading the Congregation for the Clergy since 2013.

Travel restrictions and the increasing cases of COVID-19 in Italy had forced Advincula, 68, from physically attending the consistory for the new cardinals in Rome early this month and opted to join the ceremony online.

The CBCP said that Advincula was ordained as priest for the Archdiocese of Capiz in 1976 and served as spiritual director, professor and dean of education of the St. Pius X Seminary shortly after his ordination.

Advincula was sent to study at the Pontifical University of St. Thomas Aquinas, also known as the Angelicum, where he obtained a licentiate in canon law in 1984.

He returned to the Philippines in 1990 where he was appointed as professor, spiritual director and dean of studies of the Immaculate Conception School of Theology, which is the regional seminary of Northern Luzon, in Vigan, Ilocos Sur.

Advincula became professor and spiritual director of St. Joseph Regional Seminary of the Archdiocese of Jaro after serving the Vigan archdiocese and became the first rector of Santa Mater et Regina Seminarium in 1999.

He became a bishop of San Carlos in Negros Oriental in 2001 until he was transferred to Capiz as archbishop in 2011.

Advincula is the second Filipino cardinal eligible to vote in a conclave to elect a new pope, along with former Manila Archbishop Luis Antonio Cardinal Tagle, the current prefect of the Congregation for the Evangelization of Peoples in the Vatican.

With people now flocking to churches for the Simbang Gabi, the Department of Health (DOH) yesterday asked church officials to strictly implement health protocols, including those against singing.

According to DOH Undersecretary Maria Rosario Vergeire, choir members are not exempted from the protocols against singing.

“Our protocols are not limited to karaoke. There is evidence that when you sing, many viral particles are being discharged,” she said.

Vergeire added the DOH will be strengthening its coordination with the Catholic Church to “enforce MHS inside churches especially now that many people are going there for the Simbang Gabi.”

In an advisory, the DOH cautioned that activities and settings where there can be “talsik laway” are considered “high risk” for COVID-19 infection.

These are “singing/shouting, shared/communal eating, being directly across table and lack of barriers and face masks/shields etc.”

The DOH has seen mass gatherings, including masses, as potential “superspreader events” for COVID-19.

The Department of Social Welfare and Development urged the public to provide responsible types of assistance to street dwellers and indigenous peoples so that they are safe from street hazards, especially during this holiday season. – Sheila Crisostomo, Rainier Allan Ronda