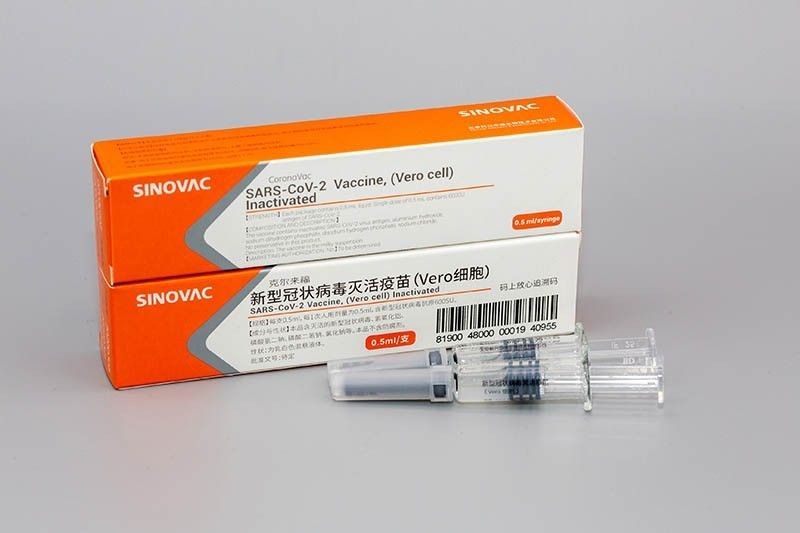 MANILA, Philippines — Sen. Francis Pangilinan on Wednesday called on the government to cancel its procurement of 25 million doses of coronavirus vaccines from China’s Sinovac after it demonstrated an efficacy of 50% in Brazil, a figure much lower than those initially announced by the South American country’s authorities.

“Sinovac, with just over 50% efficacy is 6 times more expensive than Aztra[Z]eneca which in contrast shows 70% efficacy. Sinovac is more expensive yet having almost 20% lower efficacy,” Sen. Francis Pangilinan wrote on Twitter.

“Given these latest findings, we call on the [Department of Health] to cancel the purchase of Sinovac vaccines,” he added.

Sinovac, with just over 50% efficacy is 6 times more expensive than Aztrazeneca which in contrast shows 70% efficacy. Sinovac is more expensive yet having almost 20% lower efficacy. Given these latest findings, we call on the DoH to cancel the purchase of Sinovac vaccines. pic.twitter.com/K2lr5xde4l

Global health authorities have set the benchmark efficacy rate for coronavirus vaccines at a range of 50% to 60% citing the urgent need for inoculation.

Varying efficacy ratings for Sinovac’s jabs have come out of Brazil in past weeks but the Butantan Institute, which is in charge of the country’s vaccine production, repeated its claim from last week that the vaccine is 78% effective in preventing mild cases that needed treatment and showed 100% efficacy in staving off moderate to serious cases.

But overall, Brazilian experts said it is 50% effective in preventing patients from contracting the disease, including very mild cases, although not asymptomatic ones. Last month, Turkey said the vaccine showed the efficacy of 91.25% in late-stage evaluation.

“Why would I choose a brand with only 50% efficacy and doesn’t even have application for Emergency Use Authorization (EUA), against other brands with 79% and/or 95% efficacy and have pending EUA approval from the Food and Drug Administration?” Sen. Ping Lacson said partially in Filipino on Tuesday.

He added on Twitter: “Can somebody explain why preference is given to the second most expensive vaccine, has lower efficacy, a record of suspended clinical trials and has not even applied for EUA over other vaccines that cost much less, more efficacious and are about to be granted their EUA’s?”

In December, Senate Majority Leader Juan Miguel Zubiri and Minority Leader Franklin Drilon both said that a 50% efficacy rate from Sinovac would be unacceptable.

Presidential spokesman Harry Roque on Monday said the government had procured 25 million doses of coronavirus vaccines from Sinovac, the first shipment of which is expected to arrive as soon as February.

DOH says it will not buy vaccines that are not effective

Sought for comment on the new data from Brazil, Health Undersecretary Maria Rosario Vergeire emphasized that the country has its own regulatory process for all entering vaccines.

“There are claims that in other countries they saw this efficacy in a study. When [the vaccine] enters our country, we will study all those claims, all submitted publications, the [Food and Drug Administration] and an expert panel will study all that to see if it is safe and will be efficacious to the public,” Vergeire said in Filipino during a “Laging Handa” briefing aired over state-run PTV.

“I just want to emphasize that we do not buy vaccines for Filipinos that are not efficacious, not safe. So we will use the processes of regulation for us to assure the public that we will only procure safe and efficacious vaccines,” she added in Filipino.

But a recent Pulse Asia survey found that 47% of Filipinos are not willing to be inoculated against COVID-19, while only 32% said they would receive a vaccine. An overwhelming 84% of those unwilling to be vaccinated said they were concerned that the jabs would not be safe.

Despite these reservations, Roque this week said Filipinos would not be able to choose which brand of vaccine to receive from the government, adding that “we cannot afford to be picky,” and that the government will not force inoculation on those unwilling to receive the jabs.

Meanwhile, Cabinet Secretary Karlo Nograles on Tuesday warned Filipinos that they would be forfeiting their priority slots if they choose not to take government-acquired vaccines.

Dr. Tony Leachon, who previously warned that the government’s inoculation effort could suffer if it insists on buying vaccines “contrary to the people’s preference,” said in response that Filipinos “deserve to be choosy because we need to find the right vaccines for us based on efficacy and safety.”

“And when there’s a safety concern, I think you need to heed the call of the customers,” he added.

Sen. Risa Hontiveros also said in Filipino: “Stop threatening. Stop cramming [vaccine] preferences down people’s throats. The Palace only adds to the public anxiety that is evident in surveys. Distrust is a threat to the success of the national vaccination plan.”

— with a report from Agence-France Presse