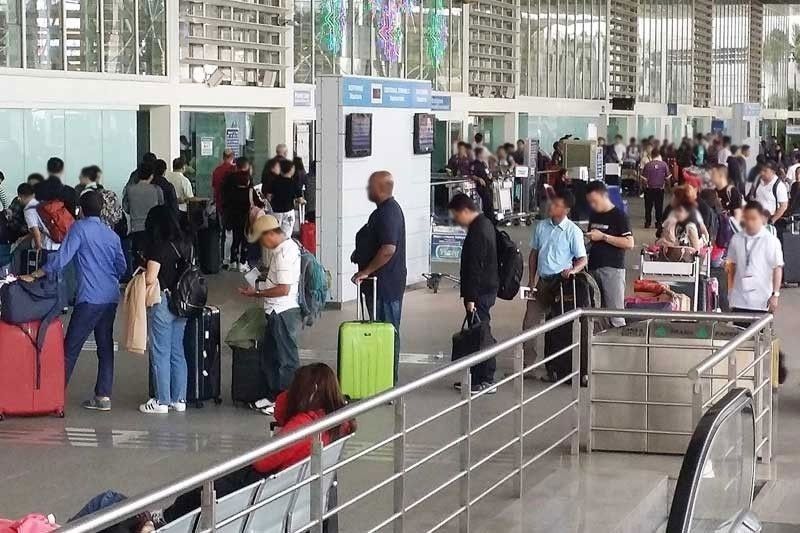 MANILA, Philippines — A Filipino passenger who arrived in Hong Kong from Manila last month has shown symptoms of the COVID-19 variant first detected in the United Kingdom, while on the sixth day of quarantine in a hotel in Hong Kong.

At a virtual briefing, a health officer in Hong Kong said the passenger is a 30-year-old Filipino citizen who took a Philippine Airlines (PAL) flight from Manila on Dec. 22.

At least two local newspapers Hong Kong News and The SUN Hong Kong reported that the passenger is a Filipina household helper. This information has been cited by Hong Kong’s health authorities but has not been confirmed by the Department of Health (DOH) as of last night.

Upon learning of the development, PAL turned over to the Bureau of Quarantine Philippines the necessary information that would enable the BOQ to conduct contact tracing for the passenger who left for Hong Kong on flight PR300 on Dec. 22.

In a statement yesterday, PAL said the passenger, whose identity it did not disclose, presented a negative COVID-19 test before taking the Manila-Hong Kong flight on that day.

“The presentation of a negative COVID test by arriving passengers is a requirement of the Hong Kong government,” the airline said.

The Hong Kong government requires passengers, upon arrival, to present a negative COVID test result and 14 days of quarantine in their respective quarantine facilities or hotels.

The passenger was booked in a hotel in Hong Kong for quarantine protocols on that same day, but on the sixth day of stay in the hotel, signs of COVID-19 were detected by health officers who immediately transferred the patient to their quarantine facility for treatment.

“PAL is fully cooperating with health authorities and strictly adheres to vital health and safety protocols to help ensure that air travel is safe even during the pandemic,” it said.

The flag carrier added that it would fully comply with every health requirement needed by the Bureau of Quarantine (BOQ) and with the new Philippine government travel restrictions regarding the new strain of the virus. The airline said it would only accept Filipino citizens, their spouses and families on board its flights from Hong Kong, Japan, Singapore, Canada, South Korea and Australia until Jan. 15.

For other flights, PAL will not accept foreign nationals who originated from, or were in transit through, or had visited the following countries within 14 days prior to arrival in the Philippines: Denmark, Ireland, Japan, Australia, Israel, the Netherlands, Hong Kong, Switzerland, France, Germany, Iceland, Italy, Lebanon, Singapore, Sweden, South Korea, South Africa, Canada, Spain, United Kingdom and United States.

Meanwhile, Malacañang announced yesterday that Portugal, India, Finland, Norway, Jordan and Brazil have been included in the Philippines’ list of countries/jurisdictions subject to travel restrictions effective tomorrow until Jan. 15, as part of efforts to prevent the entry of the new variant of COVID-19.

Presidential spokesman Harry Roque said the Office of the President came up with the decision upon the joint recommendation of the DOH and the Department of Foreign Affairs. The move brings to 27 the total number of countries and territories placed in the travel restriction list by the Philippine government.

Contact tracing has already been initiated by the DOH for the traveler from the Philippines who was found positive for the new UK variant of COVID-19 in Hong Kong.

At a press briefing yesterday, DOH Undersecretary Maria Rosario Vergeire said they could not yet ascertain when and how the traveler had contracted the mutated strain.

“We have initiated coordination already with the International Health Regulation Focal Point of Hong Kong to request further details,” she added.

As of last night, the DOH has not received a reply from Hong Kong, prompting the agency to coordinate with the World Health Organization (WHO) office in the Philippines.

Vergeire said they were able to acquire the flight manifest of PAL flight PR300, which was taken by the traveler in going to Hong Kong.

The DOH official added that they are “zeroing in” on two passengers who fit the profile of the passenger mentioned by Hong Kong authorities – a 30-year-old female.

Vergeire said they want to get the details of the traveler, including where she stayed in the Philippines, to expand the contact tracing.

Not detected in Philippines

Amid reports that Hong Kong had found the UK variant of COVID-19 in a traveler from the Philippines, a newly created technical working group (TWG) of the Inter-Agency Task Force (IATF) for the Management of Emerging Infectious Diseases yesterday said the mutated strain has not been detected in the country.

In a press briefing, University of the Philippines-Philippine Genome Center (PGC) executive director and TWG member Cynthia Saloma said the UK variant has not been found when the center conducted genome sequencing of swab samples from 305 infected individuals.

Saloma noted that the PGC also tried to look for the South African variant in 274 samples but found none.

“Among the 305 samples analyzed, we were able to assemble and assign lineages in 274 samples, none of which were classified to the lineage B.1.1.7 (UK variant),” she said.

The expert added that the “most frequent mutations observed in local samples analyzed are the D614G and S12F.”

Saloma maintained that the D614g remains to be the “dominant” strain of COVID-19 across the world.

Since the COVID-19 pandemic started, the virus has mutated more than 12,000 times, the most significant mutation having occurred in June last year, when scientists detected D6146.

John Wong, founder of health research institute Epimetrics Inc., said “it was good” that the new variant has not been detected in the country because “it could buy us some time to prepare.”

“If the variants become the dominant species, meaning, it becomes 100 percent of the species in the Philippines, our current reproduction (rate) of 1.1, (or the) 20,000 cases at the beginning of the month will be about 32,000 by the end of the month,” he added.

Three things must be done “if we want to avoid” this from happening, according to Wong: reduction of the transmission rate of COVID-19, reduction of the duration of its infectiousness and observance of health protocols.

Foreigners and Filipinos alike would still be subjected to strict COVID-19 testing and quarantine protocols even if they have gotten their vaccines prior to their arrival in the Philippines, IATF said yesterday.

“Cognizant of the current limited knowledge as to the effect of available vaccines on the transmissibility of COVID-19, any individual arriving in the Philippines who may have received vaccination for COVID-19 in other countries/jurisdictions shall still be required to observe the mandatory testing and quarantine protocols,” the IATF said in its Resolution 92.

The latest directive is among the measures being implemented by the government for the enhanced health protocols pending the country’s rollout of the vaccine, as negotiations remain underway based on the statement of National Task Force against COVID-19 chief implementer Carlito Galvez Jr.

The IATF also reiterated an earlier order from the Office of the President on the travel restrictions of individuals from abroad.

“All foreign travelers coming from or with travel history within the last 14 days prior to arrival in the Philippines in countries/jurisdictions covered by travel restrictions for the COVID-19 variant shall not be permitted entry to the Philippines until Jan. 15, 2021, notwithstanding any previous IATF resolutions or exemptions,” the IATF said.

The task force, however, said the Philippine government provides exemptions to local/accredited foreign diplomats and international organizations such as the World Health Organization and the United Nations.

“(They) shall be exempted from quarantine protocols, provided they will undergo RT-PCR test upon arrival at the airport, execute an undertaking and observe strict 14-day quarantine pursuant to relevant DOH memorandum circular,” the IATF said.

It added that foreign dignitaries who shall observe existing testing and quarantine protocols upon arrival and those for medical and emergency cases, including their medical escorts, if any, may also be allowed entry to the Philippines as long as they follow health protocols.

Meanwhile, Filipino citizens coming from countries/jurisdictions where travel restrictions are in place, or who have been to the same within 14 days immediately preceding arrival in the Philippines, shall undergo strict observation of absolute 14-day facility-based quarantine period.

The rule stays, except “for highly exceptional and/or medical reasons upon the determination of the Department of Health.”

At yesterday’s Laging Handa briefing, Galvez urged the public to consider the option of allowing themselves to be vaccinated after the OCTA Research revealed that only 25 percent of Metro Manila residents expressed readiness to take the vaccine while 40 percent remain unsure.

“First of all, I believe that they will see for themselves, once the vaccines are rolled out in the next few months, that they are safe and effective,” he said in Filipino.

The vaccine czar banked on the expertise of Food and Drug Administration director general Eric Domingo and Philippine Council for Health and Research Development executive director Jaime Montoya, who are working double time to ensure that the vaccines will be safe and affective.

He gave assurance that proper coordination is being made with the WHO. – Sheila Crisostomo, Christina Mendez, Ghio Ong