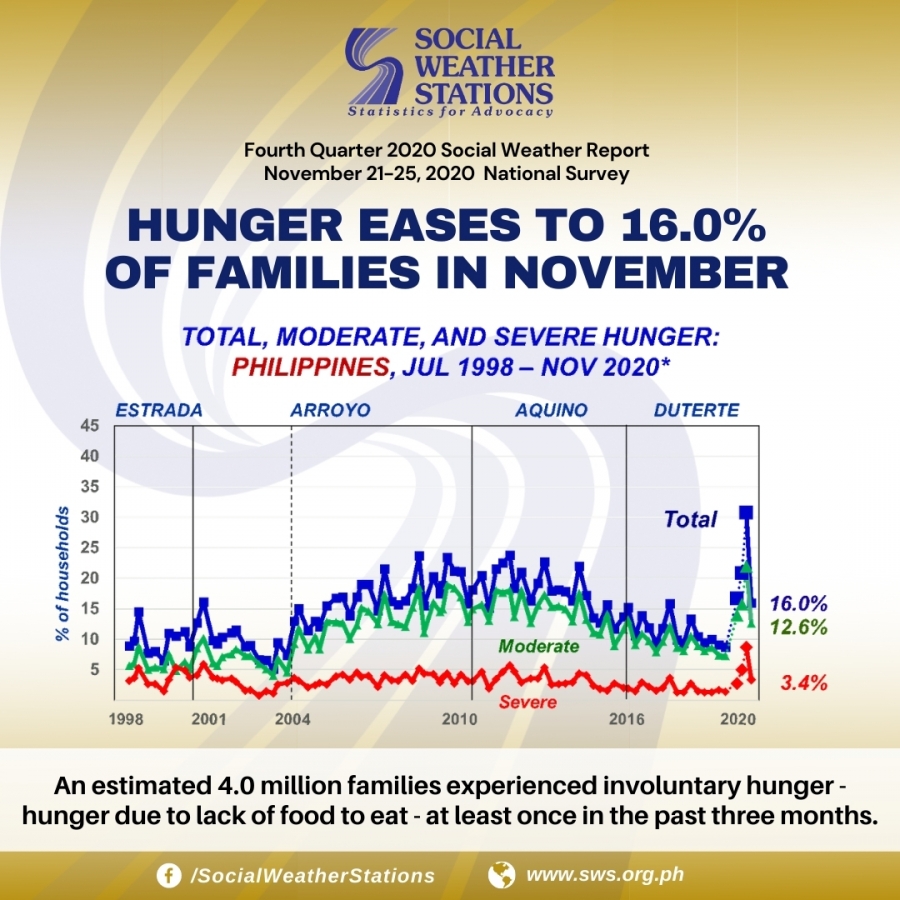 According to the latest Social Weather Stations report published Wednesday evening, some 16% of Filipino families experienced involuntary hunger, defined as hunger due to lack of food to eat, at least once in the past three months—good for a new record in terms of average hunger at 21.1% after eclipsing the record of 19.9% in 2011 and 2012, and double the average 9.3% in 2019.

Of these numbers, moderate hunger stands at 12.6% while severe hunger is 3.4% of those surveyed.

Of note, SWS said, is that the overall hunger proportion rose across the board and among both the families who described themselves as poor and those who felt they were non-poor.

A total of 1,500 working-age Filipinos participated nationwide in the institution’s research through face-to-face interviews, yielding sampling error margins of ±2.5% for national percentages, ±4% for Balance Luzon, and ±6% for Metro Manila, the Visayas and Mindanao.

Families who participated in the survey were asked: “Nitong nakaraang tatlong buwan, nangyari po ba kahit minsan na ang inyong pamilya ay nakaranas ng gutom at wala kayong makain? (In the last three months, did it happen even once that your family experienced hunger and not have anything to eat?)”

Those who experienced hunger were asked the follow-up question: “Nangyari po ba ‘yan ng minsan lamang, mga ilan beses, madalas, o palagi?” (Did it happen only once, a few times, often, or always?)

Despite high approval ratings for the administration, SWS surveys as of late continue to paint a picture of how the pandemic and government response affected the Philippines, with hunger and unemployment having reached record-highs for a time, all culminating in what the polling nonprofit institution said was the “worst trend in survey history” in terms of quality of life.

COVID 19 Updates – WATCH: ‘Save Ralph,’ the animated short that advocates against animal testing

Growing moles are not necessarily cancerous, Dr. Dave Ampil II said in a recent episode of Pinoy MD. "But it could...
Read more