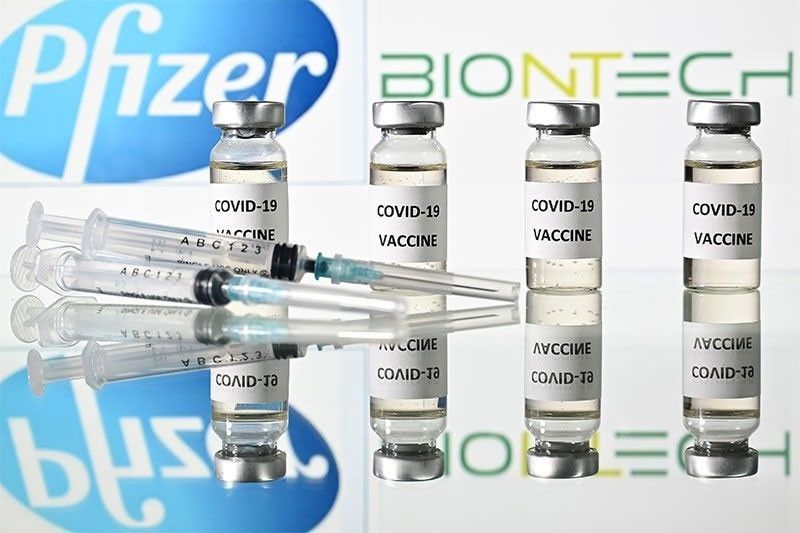 MANILA, Philippines — The Philippines’ deal with drug manufacturer Pfizer for the procurement of coronavirus vaccines is still “in progress,” Philippine Ambassador to the United States Jose Manuel Romualdez said yesterday.

Romualdez made the clarification after Foreign Affairs Secretary Teodoro Locsin Jr. said on Tuesday that the Philippines was assured of getting 10 million doses of COVID-19 vaccines from Pfizer by January until “somebody dropped the ball.”

Romualdez said in an interview with CNN Philippines that the January 2021 delivery date of the vaccines was pushed back to June because other nations finalized deals earlier and the Philippines “did not act quick enough on the Confidentiality Disclosure Agreement (CDA)” for the procurement.

“Only pushed back to later date of delivery possibly June next year… Other countries got ahead of us like Singapore,” Romualdez said.

He noted that the deal with US drug manufacturer Moderna for the supply of COVID-19 vaccines to the Philippines is also “in progress.”

“We are ‘work in progress’ with Pfizer and Moderna for supply of vaccines. If we commit soon we can possibly get delivery by mid next year,” he added.

Health Secretary Francisco Duque III said that there was no “dropping of ball” on the negotiation to procure some 10 million doses of COVID-19 vaccines from Pfizer-BioNTech.

“There is no such thing as dropping of the ball because the negotiations are ongoing. It has been continuing,” he told a press briefing.

Duque said the CDAs with vaccine manufacturers used to be signed by the Office of the Executive Secretary and the Department of Science and Technology (DOST), but last Sept. 24 he noted that they were informed that the Department of Health (DOH) will be signing the CDA.

Duque added that he had to refer the document to the lawyers of the DOH, Office of the Executive Secretary and DOST to study.

“On Oct. 20, on the day that it was submitted to me, I signed it already. So there is no such thing as somebody dropping the ball. It’s an ongoing negotiation,” he said.

Duque added that vaccine czar Carlito Galvez Jr. had signed the CDA with Pfizer-BioNTech in November.

The DOH assured the public that the department acted with urgency in dealing with the CDA with Pfizer-BioNTech.

In a statement, DOH said they also acted in accordance with the protocols of the government in securing vaccines against COVID-19.

The agency added from the time it was instructed to sign the CDA in behalf of the government, its legal and technical teams worked closely with Pfizer to finalize the agreement and negotiate on several contentious provisions.

After a thorough review process with the concerned agencies, including the Office of the President, the CDA was signed the same day it was finalized.

Presidential spokesman Harry Roque Jr. was mum when asked if the Palace would hold accountable the person responsible for the delay in the Philippines’ acquisition of the vaccine from Pfizer.

Roque maintained he does not know who the person Foreign Affairs Secretary Locsin was referring to.

“Galvez is vaccine czar and he doesn’t know either. What matters is we’re full speed ahead on acquiring the vaccine from all sources,” Roque said in a text message to reporters.

Already the country’s chief implementer of the National Task Force Against COVID-19, Galvez was named vaccine czar by President Duterte in early November.

Based on the timeline, the President’s action was deemed as a result of the reported slow-paced action of the DOH on the CDAs for the requesting pharmaceuticals.

A source told The STAR that Duque could be the cause of delay after he failed to act promptly on the request for CDA of the vaccine developer, which was put forward sometime in the middle of the negotiations mid-2020.

Vaccine manufacturers Moderna, Pfizer and Novavax have been working closely with the Department of Foreign Affairs and the embassy in Washington for the paperwork.

“The country manager has been calling us that the CDA has not been signed b y Sec. Duque,” the top government official said, defending the administration from criticism that the government was remiss in its duty to find vaccines for Filipinos despite Duterte’s public promise to do his best.

“Nobody knows, but it took several calls from (Finance Secretary Carlos) Dominguez and other officials for Sec. Duque to act,” the source added.

The issuance of the CDA, the source explained, is the requirement of the pharmaceutical group so there would be a commitment.

Sen. Panfilo Lacson said yesterday that he continues to wonder why the unnamed official who allegedly committed a blunder that led to the delay in procuring Pfizer vaccines remains at his post.

Lacson, apparently referring to Duque, blamed the “one who dropped the ball” for the missed opportunity to purchase Pfizer vaccines as early as January next year.

“He wasted the efforts of Foreign Affairs’ Locsin and Ambassador ‘Babe’ Romualdez in that regard,” the senator said.

“You can figure out who is the captain ball I am referring to, who keeps dropping the ball but manages to stay in the game because the coach refuses to replace him,” he said.

Galvez also announced that the Philippines is eyeing to finalize negotiations with Sinovac Biotech Ltd. this week to acquire 25 million doses of the Chinese company’s COVID-19 vaccine for delivery by March 2021.

He said the Philippines conveyed to Sinovac representatives the country’s needs for vaccine distribution.

Former special adviser to the National Task Force against COVID-19 Tony Leachon questioned the government’s preference for the Sinovac vaccine despite the lack of efficacy and safety data, as well as its cost high compared to others and past allegations of bribery.

It will take up to three months after the follow-up shot is given to determine the efficacy of the coronavirus vaccine, an expert from the Philippine Foundation for Vaccination (PFV) said Tuesday night.

In an interview with “The Chiefs” on Cignal TV’s OneNews, PFV executive director Lulu Bravo noted that nothing is certain yet because the COVID-19 vaccines are new.

“We don’t know if the efficacy of the Pfizer and Moderna will go down as the months go by, as the years go by. The initial observation is only two to three months and is very short,” she added.

Currently, there is no COVID-19 vaccine in the world licensed by regulatory authorities. Some are already being administered by virtue of emergency use authority.

But she said even if there is already a vaccine, it is important to follow the “WWD” health protocols: “wash your hands, wear your mask, (observe) physical distancing and don’t gather for Christmas.” – Sheila Crisostomo, Christina Mendez, Paolo Romero