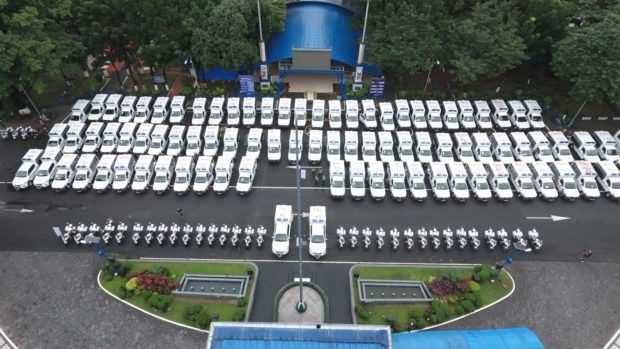 “We showcased [on Monday] the P569-million worth of enabling equipment to fill-up the requirements of PNP units for mobility, firepower, and communications, which are among the key priorities of our capacity-building, modernization, and development agenda,” Police Gen. Camilo Cascolan, PNP chief, said in a statement.

With the move, which is part of the newly-minted police chief’s modernization program under PNP P.A.T.R.O.L. Plan 2030, the police’s mobile forces and high-risk police stations are set to receive 7,700 units Galil Ace 5.56mm Basic Assault Rifle while the 434 units Digital Handheld Radio will be given to Metro Manila’s police office.

According to Cascolan, the new police motorcycles will significantly enhance the PNP’s operations involving high-speed tactical police response to street-crimes, particularly those perpetrated by riding-in-tandem suspects.

In his latest directive, Cascolan signed a memorandum to increase police visibility in streets and major thoroughfares ‘by adding more motorcycle patrols to our existing fleet and initiate refresher training to mounted tactical responders.’

Senate President Pro Tempore Ralph Recto in a separate statement also called for “an accelerated program” to equip officers and patrol cars of the PNP with dashboard and body cameras, which he pointed out were not even high-ticket acquisitions.

“If food delivery guys wear them or have them on their bikes, why can’t our police officers and cars have them too?” Recto said in mixed Filipino and English.

“It is a tool for smart policing…At this point in time you can even track food deliveries in real time. In this age of Facebook Live, and when dashcams are sold on the sidewalk, there’s no excuse why our policemen still do not have what is standard police gear in many countries,” he also said.

The PNP’s procurement of 2,600 bodycams was initiated in 2017 following the killing of teenagers, including Kian Delos Santos, in anti-drug operations, but was only completed and delivered earlier this year. According to Recto, at the rate the PNP is buying bodycams, “it will take 100 years” to provide every policeman with one.

“Pero actually ang kailangan lang sa ngayon ay 40,000, or even less, on the assumption that only one for every five policemen, or those who will go on patrol or operations would be needing one. But at current acquisition rate, 20 years pa rin ang aabutin,” Recto said.

“[This] will save evidence needed to prosecute criminals. As they say, they will have receipts…Played in court, the footage will buttress the case of the prosecution with evidence that is hard to refute. Cameras will also ensure that procedures are being followed in police operations. This cuts both ways. It will protect citizens from abuse, and the police from unfounded charges of abuse,” he said.

“It works that way too for dashcams. In the event of accidents or pursuit operations, or even just a case of reckless overspeeding, there will be video proof,” he said, adding that such equipment could also be used as a tool for police commanders who will know if patrol cars did go on their route, Recto said. — with a report from Bella Perez-Rubio