Mindy Kaling Welcomes Baby No. 2Drumroll please! Mindy Kaling has finally revealed her son Spencer's middle name. The decision to do so came after Mindy...
More 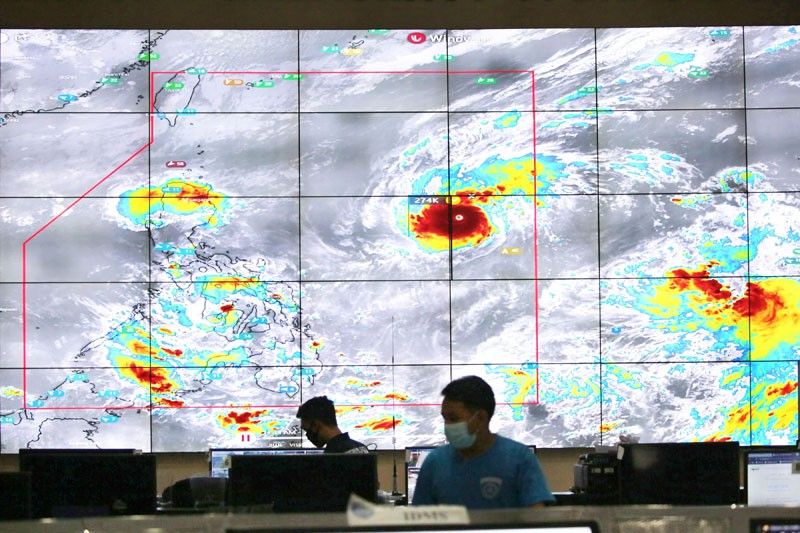 MANILA, Philippines — Typhoon Rolly barreled toward the country yesterday, with weather forecasters warning that it could  intensify into a super typhoon that will bring destructive winds and intense rains over Metro Manila and other parts of Luzon this weekend.

Rolly (international name Goni) was forecast to pack maximum sustained winds of 175 to 195 kilometers per hour when it makes landfall over Aurora-Quezon tomorrow night or early Monday.

Weather forecaster Raymond Ordinario of the Philippine Atmospheric, Geophysical and Astronomical Services Administration said PAGASA was not ruling out the possibility that Rolly would reach the super typhoon category as it continued to gather strength over the sea.

The US Joint Typhoon Warning Center (JTWC) earlier predicted Rolly’s peak to reach the super typhoon category with 240 kph maximum sustained winds while over the sea.

PAGASA and the JTWC use different standards in classifying cyclones. The JTWC uses one-minute average readings for a cyclone’s wind speed. PAGASA has lower figures because it uses 10-minute readings similar to the standard used by the Japan

PAGASA classifies a cyclone with maximum sustained winds of 220 kph and above as super typhoon.

As of 4 p.m. yesterday, the eye of the storm was located at 980 kilometers east of Casiguran, Aurora with maximum sustained winds of 185 kph near the center and gustiness of up to 230 kph.

It was forecast to move west at 20 kph.

The trough or extension of the typhoon and the northeasterly surface windflow will continue to bring light to moderate to at times heavy rains over the Bicol region, Eastern and Central Visayas, Caraga, Northern Mindanao, Zamboanga Peninsula, Batanes, Cagayan and Isabela today.

Heavy to intense rains will affect northern and central Luzon and Bicol, especially in areas along the typhoon’s path beginning today or tomorrow.

Tropical cyclone wind signal No. 1 was hoisted over Catanduanes as of 5 p.m. yesterday.

PAGASA said signal No. 3 or 4, associated with destructive to very destructive winds, might be raised throughout the passage of the typhoon.

The agency also warned against storm surges of up to two meters high along the coastal areas of Aurora, Quezon, Marinduque, Bicol region and Northern Samar.

Ornidario said Rolly was forecast to exit the Philippines Tuesday or Wednesday.

Meanwhile, the weather bureau was also monitoring another storm outside the Philippine area of responsibility.

The storm, with international name Atsani, was forecast to enter the Philippine area of responsibility tomorrow or Monday.

It was moving west northwest at 35 kph.

“It is less likely to bring severe weather over any locality of the country over the next three days,” PAGASA said.

Once inside the Philippine area of responsibility, it will be locally named Siony.

Ordinario said Siony might intensify into a severe tropical storm within the next 24 to 36 hours.

It is likely to pass near the extreme northern Luzon, he said.

The National Disaster Risk Reduction and Management Council (NDRRMC) urged local government units and the public to brace for the strong impact of Typhoon Rolly.

NDRRMC chief Ricardo Jalad said that Rolly could bring “dangerous situations” due to its strength as it is expected to bring heavy to intense rainfall.

He said all mayors and governors should be present in their jurisdictions when the typhoon hits or face possible sanctions.

“You don’t need to wait for the storm before evacuating specially low-lying areas on the eastern seaboard, and at the same time preposition relief goods while local chief executives should really be present,” he told radio station dzBB in Filipino.

Año said that public school buildings could be utilized as evacuation centers but all preparations should adhere to health standards amid the coronavirus pandemic.

Jalad appealed to the public to prepare for Rolly while still maintaining health protocols, such as wearing face masks and social distancing, amid the COVID-19 pandemic.

The Diocese of Lucena will allow evacuees affected by Typhoon Rolly to seek shelter in Catholic churches in Quezon.

Fr. Bryan Cabrera, social action director of the diocese, said in a radio interview that they have coordinated with the parishes to ensure that the churches would remain open for those who will seek temporary shelter.

Cabrera added that they are also preparing food packs and relief goods that would be distributed to the evacuees.

“We also encourage people to pray and be ready for this possible super Typhoon Rolly,” he added.

Novaliches Bishop Roberto Gaa urged the faithful to storm the heavens with prayers so that the Philippines and the Filipino people will be spared from any harmful effects when Typhoon Rolly makes landfall in the country.

Legaspi Bishop Joel Baylon also extended his prayers for the residents in Aurora and Quezon provinces where the typhoon is expected to make landfall on Sunday.

Nueva Caceres Archbishop Rolando Tirona urged parish priests and religious communities in the archdiocese to initiate prayer vigil “or offer a votive mass to spare our people and Mother Nature from further sufferings and pain” from the typhoon. – Robertzon Ramirez, Romina Cabrera