With speed and resiliency, Baltimore Ravens quarterback Lamar Jackson exacted postseason revenge and silenced those who doubted he could win when it matters...
More 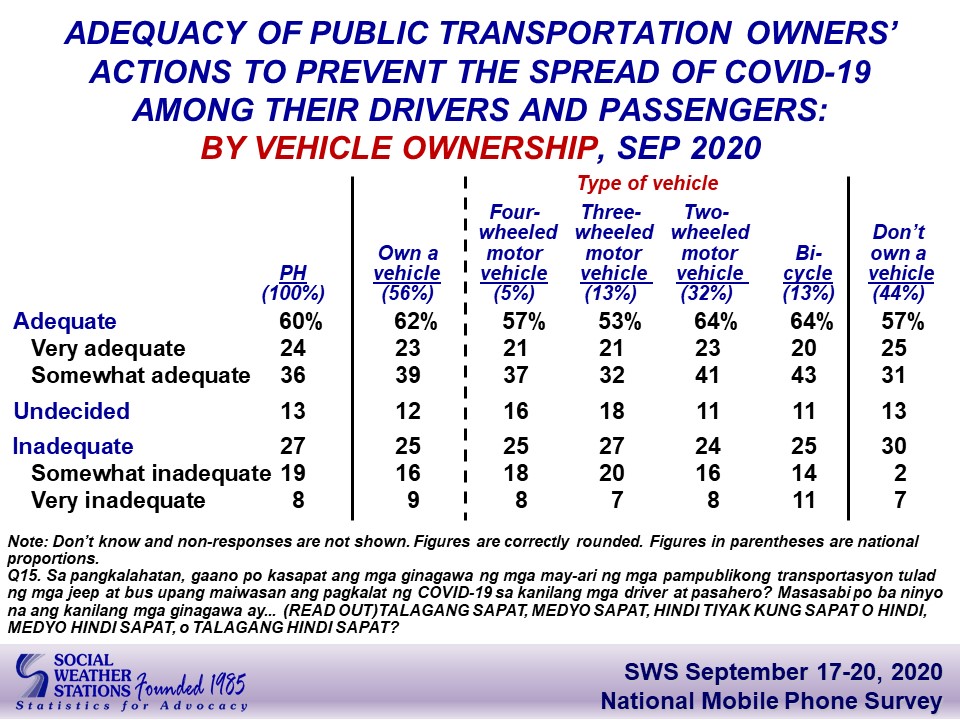 MANILA, Philippines — A recent Social Weather Stations survey showed that more than a majority of the commuting public are satisfied with actions in mass transport to prevent the spread of the coronavirus among drivers and passengers.

Some 60% had found the said actions as “adequate” in a mobile phone survey conducted from September 17 to 20 on 1,249 respondents.

27%, meanwhile, disagreed that public transport owners’ response had been enough to prevent virus transmission, while 13% were undecided.

Millions of Filipinos began to return to work in June after months that saw work and movement restricted throughout the country as a precaution against COVID-19.

Curbs on transport had since been relaxed even further, with the national government this month increasing rail capacity from 30 to 50%, as well as rolling out a one-seat apart rule in commute.

Those in Visayas had agreed the most that measures are enough, followed by those In Mindanao at 62%, Balance Luzon at 59%, while Metro Manila residents were the least at 51%.

The survey further revealed that those without vehicles were not as satisfied compared with those who own cars.

“The proportion of those who say the public transportation owners’ actions to prevent the spread of Covid-19 among their drivers and passengers are “adequate” is slightly but significantly less among those who do not own any vehicle (57%) than among vehicle owners (62%),” SWS said.

(How adequate do you think are the actions of public transport owners such as jeeps and buses to prevent the spread of COVID-19 among their drivers and passengers?)

Government at the early onset of relaxing restrictions only allowed limited modes of transport to resume work, spelling trouble for many who rely on public transport — despite its poor conditions and traffic situation — to fend for themselves.

Transport officials had earlier ordered reduced physical distance in commute from the recommended one meter by the World Health Organization to only .75, which was later on shot down by President Rodrigo Duterte. This was despite an incident in MRT-3 where at least 186 of the train station’s personnel contracted the COVID-19, which had let to its momentary shutdown.

Jeepneys and buses were later on allowed to return to the roads, after groups pressed officials on the move, citing the need of the public as well as of drivers who have went on for months without work. More jeepney routes have also been allowed by the LTFRB in Metro Manila and its neighboring provinces.