SWS: Less than 30% of Filipinos believe in accuracy of COVID-19 tally

MANILA, Philippines — A nationwide survey has showed that a significantly small number of Filipinos believe that the country’s reporting of coronavirus infections and deaths are accurate.

Results of a Social Weather Stations poll said only 23% are convinced that government figures are “probably right,” while 39% believe that such are overreported, and 31% said it is less than the real picture or underreported.

The SWS had 1,249 respondents for the survey that was conducted from September 17 to 20, a time when the Philippines was reporting more than 3,000 new infections for several days to bring the total to more than 286,000.

The poll was conducted using using mobile phone and computer-assisted telephone interviewing of 1,249 adult Filipinos nationwide. Sampling error margin is at ±3% for national percentages, ±6% for Metro Manila, ±5% for Balance Luzon, ±6% for the Visayas and ±6% for Mindanao.

Coronavirus cases have since soared to 375,180 by end-October, with government shifting its policy of asking people to stay indoors to now going out in a bid to restart the economy.

As for the reported deaths, 27% believe that the figures are accurately given, with 34% saying the fatality count is more than the real number while also another 34% convinced that such are underreported. From the time of the conduct of the survey, the Philippines had 4,984 deaths in what has now reached 7,114. 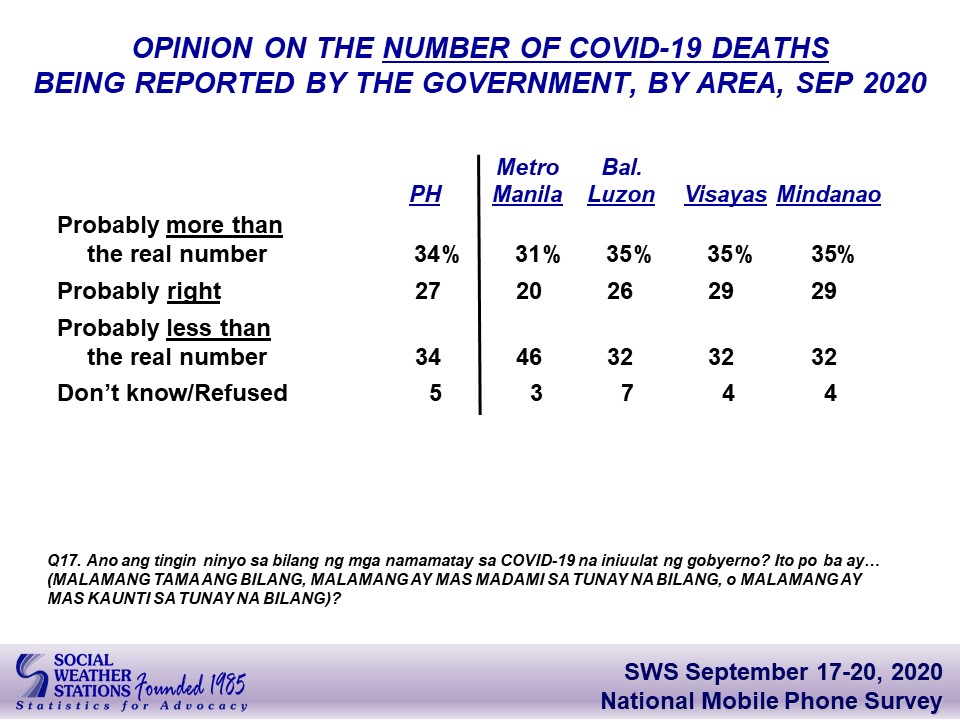 In both cases, figures are perceived as least accurate among residents of Metro Manila, only 14% agreeing that the number of positives are correct and 20% for the fatalities.

The Philippine Red Cross this October halted for nearly two weeks its coronavirus tests funded by the Philippine Health Insurance Corp. over the millions in unpaid debt. Such had caused the country’s testing capacity to go reach its lowest in over three months, falling below the 30,000-daily mark.

This had led the OCTA Research Group, an independent team of experts from the academe, to warn that Red Cross’ decision to stop its tests may not show an accurate picture of the country’s coronavirus situation.

The halt, researchers added, had resulted in a drop of reported infections in the capital region as well as in its neighboring provinces by 40% to 50%. The humanitarian orgranization had since resumed its screening of samples after the state insurer hounded by corruption allegations paid at least P500 million or half of its overdue amounts.