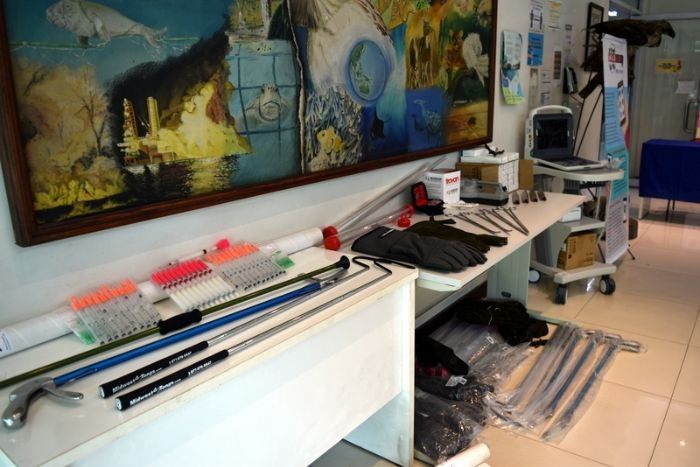 US donates P2.3-M in equipment, WildAlert system to DENR to protect Philippine wildlife

MANILA, Philippines — The US last week turned over essential equipment and supplies to the Department of Environment and Natural Resources to boost its work in combating wildlife trafficking and providing holistic care for rescued wildlife in its custody, its embassy in the Philippines said Wednesday.

The United States Agency for International Development (USAID) made the donation — comprised of tools worth over P2 million as well as a system intended to prevent wildlife crime — as “part of its support to strengthen wildlife law enforcement and protection in the Philippines.”

“With new tools in place and the WildALERT System ready for roll out, the DENR is now better equipped and ready to respond to wildlife rescues and to conduct anti-wildlife trafficking operations, contributing to the Philippine government’s heightened prevention of zoonotic diseases and potential pandemics,” a press release from the US Embassy in the Philippines reads.

The equipment, valued at P2.3 million, will be used for the proper handling and management of wildlife, particularly those rescued from illegal trade, the embassy said.

Among the items donated were conservation tags, armored gloves, snake tongs, forceps and microchips, which the embassy said would aid in the efficient handling and tagging of live animals. The items will be distributed to DENR rescue centers across the country.

Wildlife handling tools donated by USAID which will be distributed to DENR wildlife rescue centers across the country.

In addition to helping DENR veterinarians and personnel properly examine and care for rescued and injured wildlife, these tools will also speed up the animals’ rehabilitation and recovery as well as their eventual return to their natural habitats.

It added that WildALERT was developed through the collaborative effort of USAID and the DENR to help agents on the ground to curb wildlife crimes through “real-time and centralized reporting.”

“The system, made up of a mobile app and a reporting management platform, helps users correctly identify rescued wildlife species and promptly submit digitized reports of wildlife law violations. This can help improve the daily enforcement operations of the DENR and partner agencies across the country.”

Chief of Party of USAID’s Protect Wildlife Project Rebecca Paz handed over the tools as well as the WildALERT system and manuals to Director of the DENR’s Biodiversity Management Bureau Ricardo Calderon on December 11, 2020.

A thread of major developments in the bilateral relations between the Philippines and the United States from April to December 2020. (Photo by AFP/Mark Cristino)

Citing Washington’s realignment of its position on the South China Sea with the 2016 arbitral ruling that invalidate Beijing’s expansive claims, O’Brien stresses that resources in the area belong to the Filipino people.

The US Embassy in the Philippines says the US government has turned over 150 laptop computers, printers, projectors and 80 sets of learning materials to the Department of Education through the United States Agency for International Development.

“This assistance is part of USAID’s Opportunity 2.0, a five-year, P1.9-billion ($37.5 million) project that works with DepEd, the Technical Education and Skills Development Authority, and local governments to support their ongoing programs to provide relevant education, employability skills, and work experience to out-of-school youth,” the US Embassy says in a statement.

The US government launches a new program to provide second-chance opportunities to at least 180,000 out-of-school youth in the Philippines.

Under the five-year “Opportunity 2.0” project, which is worth P1.9 billion, the USAID will partner with DepEd and TESDA to augment their ongoing programs that provide relevant education, employability skills and work experience.

“Through this new partnership, we can leverage a range of resources to maximize the potential of the Filipino youth, particularly those who are out-of-school or unemployed. With the right knowledge, attitudes, and skills, they will play a pivotal role in this great country’s growth and success over the long-term,” US Ambassador Sung Kim says.

US Secretary of State Mike Pompeo called Foreign Affairs Secretary Teodoro Locsin Jr. to discuss the recent change in US policy on maritime claims in the South China Sea, the US Department of State says.

The two foreign ministers also discussed US support for Southeast Asian coastal states upholding their sovereign rights and interests consistent with international law, as well as opportunities for further maritime cooperation between the two countries.

“The two secretaries also discussed the strong economic, security, and people-to-people ties that bind our two countries,” the statement read.

The US Army and Marine Corps service members, in partnership with the Philippine Air Force, Army and Coast Guard, deliver an additional P11.4 million ($236,000) worth of personal protective equipment and medical supplies to hospitals in 11 cities in the Philippines.

The latest donation brings the total assistance of the US government to the Philippines’ efforts against COVID-19 to P989 million (more than $20 million).

“This latest delivery of U.S. government assistance for Filipino frontliners in the battle against COVID-19 is a testament to our ongoing commitment to help the Philippines defeat the pandemic,” US Ambassador Sung Kim says.