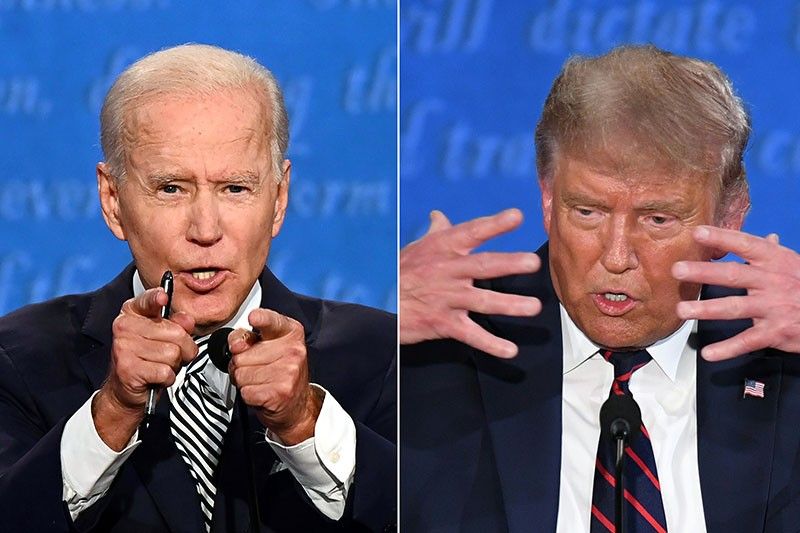 Whether Biden or Trump wins, US will adapt to Philippines’ stand on South China Sea — analyst

MANILA, Philippines — The United States, whether under a Joe Biden or Donald Trump presidency, would continue to support the Philippines’ claims on the South China Sea, an analyst said.

Drew Thompson, visiting senior research fellow at the National University of Singapore’s Lee Kuan Yew School of Public Policy, said whoever wins the 2020 US presidential race would not be a significant factor on the issue.

“It certainly comes down to the Philippines and how hard is the Philippines going to seek to protect its claim, how is it gonna hedge between the US and China,” Thompson said at an online forum on Tuesday.

“And the US will continue to adapt to that,” he added.

Thompson pointed out that Washington is not a claimant state on the South China Sea so it does not have a direct competing claim with Beijing.

Philippines a ‘hook’ of conflict

According to Thompson, the main interest of the US in the South China Sea is being able to traverse and cross through the contested waterway.

The US Navy has regularly been conducting freedom of navigation operations in the South China Sea, which Beijing sees as infringement of its sovereignty.

“Freedom of navigation issue is really the critical interest. It’s not about the claims of the territory,” Thompson said.

China’s expansive claims over the South China Sea overlaps with claims of other Southeast Asian countries, such as Brunei, Malaysia, the Philippines and Vietnam.

Thompson, however, noted that another issue would be the alliances that Washington has. The Philippines and its former colonizer have long been allies through the 1951 Mutual Defense Treaty (MDT).

“In terms of all the flashpoints in the region, the Philippines is really the only hook that will bring the American interest in direct conflict with China,” Thompson said.

When US State Secretary Mike Pompeo visited Manila last year, he declared that any attack on Philippine forces in the West Philippine Sea, the portion of the South China Sea within the country’s exclusive economic zone, would trigger the defense pact.

Lack of confidence in US

Whichever American presidential bet will win the polls would face a region that lacks confidence in the US with China’s rising influence, Thompson noted.

While the Trump administration has stepped up its policy on the South China Sea, Thompson said the previous administration’s “fumbles” in the region cannot be undone by more operations in the disputed sea.

“Certainly, the Trump administration had stepped up and been much more forward leaning, demonstrative on things like the South China Sea, but again the facts on the ground were already changed at that point by China,” Thompson said.

Noting that Biden would be “more dignified,” Thompson said a question for his potential presidency would be if he would bring back the same foreign policy characters from the Obama administration.

Former US President Barack Obama introduced a “pivot to Asia,” where he increased military ties with countries in the region, including the Philippines.

“The Biden administration might not be willing to take risks or that they’re not willing to use friction whether with friends or competitors, so I think there’s concern that this could be an administration of half measures and foreign policy,” the analyst said.

In July, the US declared that it would treat Beijing’s claims to resources in the South China Sea as completely unlawful. Soon after that, Washington also announced sanctions against 24 Chinese state-owned firms involved in building artificial islands in the area.

“The world will not allow Beijing to treat the South China Sea as its maritime empire,” Pompeo said in July.

In its new South China Sea policy, the US cited the Philippines’ July 2016 arbitral award, which invalidated China’s nine-dash line claim over the contested sea.