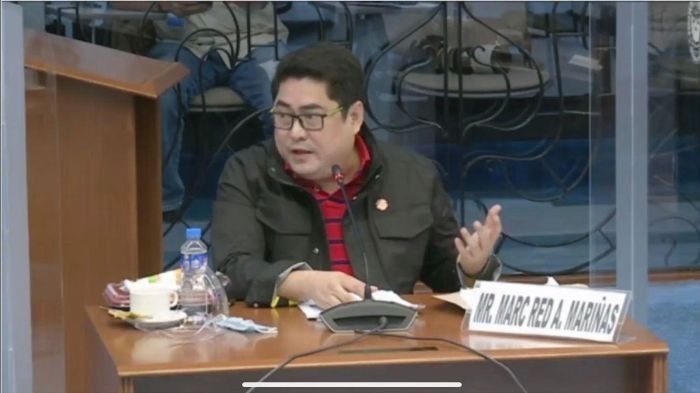 Immigration Officer Allison Chiong, the first whistleblower in the controversy, said this was disclosed by higher operators of the scheme to their subordinates who were following up on late payouts.

“Of course, people asked: ‘Is there pastillas already?’ Because it was two months delayed already, that used to happen. What the Viber admins and the [Travel Control and Enforcement Unit] used to say is that they were told by their leaders from the TCEU…that this was for the campaign of sir Red [Mariñas],” Chiong told the Senate Committee on Women, Children, Family Relations and Gender Equality in Filipino.

Mariñas, who was physically present for the hearing on Tuesday, denied that there was a pyramid or structure to the ‘pastillas’ scheme and reiterated his denial of allegations that he was the mastermind behind it.

“Deb Binsol accumulated debt worth P35 million, and this ballooned to P50 million, and this was reported…they were disparaging one another in the tabloids. And then, the terminal head, sir Dennis Robles, also had a big debt, and reportedly they told the [Viber] admins that they were not paying because [the money] was for the campaign of sir Red Mariñas in Muntinlupa,” Chiong said in Filipino.

“Kaya po sumisikat talaga yung pangalan ni sir Red sa airport, kasi sinasabi na para sa kampanya po niya, (That’s why his name was becoming popular at the airport, because it was being said that [the money] was for his campaign,” he added.

Mariñas was a distant second to reelectionist Jaime Fresnedi in the 2019 mayoral race.

Both Chiong and Immigration Officer Jeffrey Dale Ignacio insisted on the pyramid or the existence of the heirarchy of bosses, middle officers, and footsoldiers with regards to the scheme.

Adding weight to their testimony was the confirmation of Emerito Dongallo Jr., chief of the NBI Special Action Unit (SAU), who said that there seemed to be a heirarchy in the implementation of the scam.

Ignacio was revealed as the second whisteblower during an earlier hearing for the same probe on October 6, wherein he confirmed Chiong’s original testimony.  He further outlined the specifics of how the money-making racket at the Bureau of Immigration was run.

Ignacio, one of the 19 respondents in the NBI’s graft complaints over the scheme, said that, in exchange, officials involved periodically received P5,000 to P20,000.

Hontiveros on Tuesday emphasized that Mariñas, whether he was aware or unaware of the scheme, is liable under the principle of command responsibility. — Bella Perez-Rubio with reports from Kristine Joy Patag